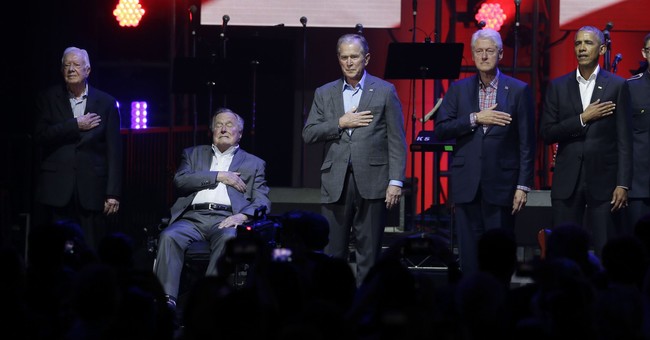 Over the weekend, the internet became delighted over a short gif of former President George W. Bush cracking a joke during former President Bill Clinton's speech at a hurricane relief concert at Texas A&M University over the weekend. Midway through the speech, you can see Bush mumble something out of the corner of his mouth behind Clinton, which causes former President Barack Obama to burst out laughing. Bush then looks quite amused with himself.

W cracking a joke to Obama while Clinton gives a speech is me in middle school pic.twitter.com/Sw6uQwXRcf

The gif shot to the front page of Reddit on Sunday, and went quite viral on Twitter as well, being shared thousands of times.

Neither Bush nor Obama has revealed just what was said, but clearly it was pretty funny.

Saturday marked the first time since 2013 that five former presidents--Bush, Clinton, Obama, H.W. Bush, and Jimmy Carter--have been in the same place at the same time.

Despite their partisan differences, Bush 43, Obama, and Clinton have become quite friendly since they have left the office. Bush has referred to Clinton as his "brother from another mother," and the two have teased each other about their social media habits. (Bush prefers Instagram, and Clinton likes Twitter.) At the opening of the National Museum of African American History and Culture, the internet was charmed when former First Lady Michelle Obama and Bush hugged like close friends.

I never thought I'd see the day when people were nostalgic for the Bush administration, but I guess things have changed.