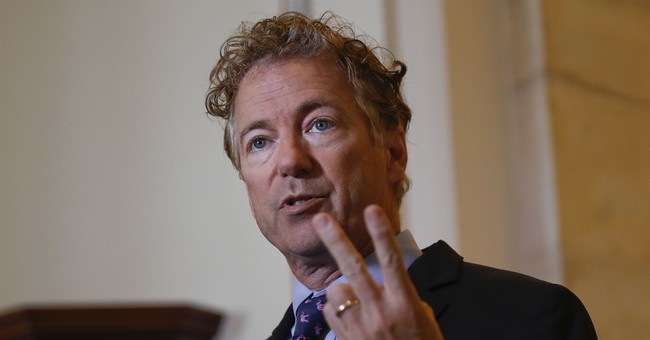 In an op-ed penned for Breitbart, Sen. Rand Paul (R-KY) explained that President Donald Trump's upcoming executive order--which would legalize the sale of health insurance across state lines--would come at zero cost for the taxpayer and would enable 28 million people "left behind" by Obamacare to purchase insurance cheaply.

According to Paul, the executive order will create "Health Associations," which would allow people to create groups similar to large corporations in order to get lower premiums on their plans. Paul said that these Association Health Plans will "be among the biggest-free market reforms" of the healthcare industry in decades, and is a better alternative than repealing the bill outright. Paul called Trump "bold" in making these changes, and said that he worked with Trump for a long time to create this executive order.

How will it work? Well, nationwide associations like the National Restaurant Association will be allowed to form groups across state lines and, with the leverage of size, demand Big Insurance bring down their outrageous premiums.

Many of the 28 million people left behind by Obamacare who still don’t have insurance work low-wage jobs in our fast food restaurants. The President’s decision today will allow workers from two million restaurants to come together to form a buying group and through sheer size get cheaper and better insurance.

Millions of people will be eligible for the same group insurance that big corporations offer. In fact, Health Associations may grow to be larger than the largest of our corporations. Currently, about half of private insurance is cross-state, self-insured ERISA plans, and most employees love them.  The President’s action today will allow the millions of people in the individual market an escape route to group insurance.

Association Health Plans will be among the biggest free-market reforms of health care in a generation, and it will do more to counter the impact of Obamacare than most of the repeal bills did, because it will actually go after regulations that the legislation didn’t touch due to Senate rules.

Existing law allows the President to legalize these new groups and plans. Where previous administrations have been weak, President Trump is bold to allow this reform.

Additionally, Paul explains that these new "Health Associations" are cross-state entities that are exempt from some of the costly state and federal regulations other plans face. Pre-existing conditions are not a disqualifier from the plan, either. Paul supports this plan as it is not a mandate, subsidy, or tax, but rather is a removal of regulations and other barriers.

Trump is scheduled to make his announcement regarding the executive order shortly.