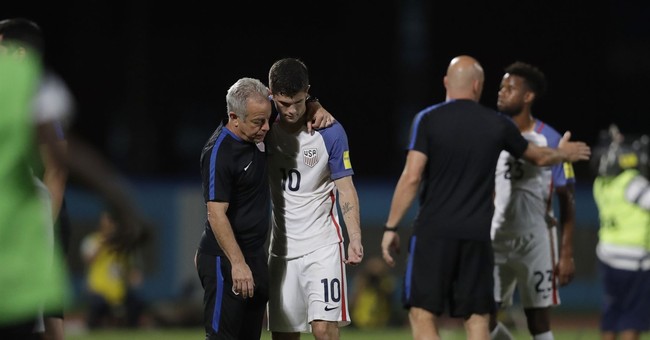 For the first time since 1986, the U.S. Men's National Team has not qualified for the FIFA World Cup. The United States' hopes were dashed on Tuesday night following a 2-1 loss to Trinidad and Tobago in qualifiers. Given the country's recent emphasis on soccer and relative success in getting out of group play in past World Cups, the failure to qualify for 2018 is viewed as disappointing and embarrassing.

Needless to say, people in the sports world were incredibly distraught.

I need a drink. For a month straight. #USMNT

If you are a American soccer fan, be angry, scream from the hill tops, this should never happen. #USMNT

I love #MLS. Not their fault. But now so many #USMNT players have been brought back/kept from leaving, is it time to review the structure?

Taylor Twellman, who played for Team USA for over a decade, went on an impassioned rant about the numerous problems facing USA Soccer and the failure to fix problems within the system. Among the things highlighted were the U.S.'s "pay to play" practices, and the lack of proper development of players who can be competitive on the international scale. It's certainly worth a watch, as Twellman does not hold back:

Taylor Twellman on the #USMNT fiasco. Your eyes, mate. Dry them. pic.twitter.com/YaRdBtPe55

I was really disappointed the USA men's team didn't qualify for the World Cup. Then I remembered I couldn't care less about soccer.

Run around for 90 minutes.
Flop when barely touched.
Score 1 goal at most.
Do I got it?
;)