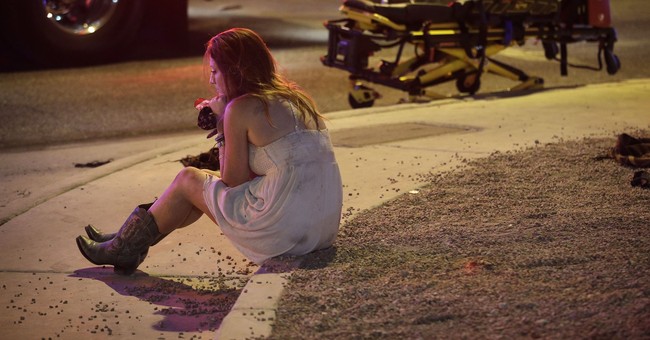 I wrote last week about the incredible story of Taylor Winston, a Marine veteran who stole a truck after the shooting in Las Vegas to transport about a dozen people to the hospital in two trips. (Winston eventually returned the truck.) Now, a used-car dealer in Gilbert, Arizona has given Winston a truck, as a token of his appreciation for his bravery and selflessness.

Naturally, Winston plans on returning to Las Vegas. In addition to meeting with victims of the shooting, he's going to "hang out" with his girlfriend.

This time, Winston drove his own truck — a $20,000 Ford F-150 pickup presented to him Monday by a Phoenix-area used-car dealer who wanted to thank him for his selflessness.

“Our first stop is Vegas,” Winston said after picking up his pickup from B5 Motors owner Shane Beus in Gilbert, Arizona.

Along with visiting more shooting victims in Las Vegas, he and girlfriend Jenn Lewis planned to “go back for a day and hang out” before heading to Nashville, Tennessee, for a friend’s wedding.

Winston plans on selling his old truck and donating the proceeds to the victims' fund. He told the Las Vegas Review Journal that he still plans on attending the Route 91 Festival again in the future, saying that while he's certainly a little nervous, he won't be deterred by the shooting.

While the events of the Las Vegas shooting were unspeakably horrific, stories like Winston's--that showed how utterly amazing people can be--were a reassurance that the world is not an entirely awful place. While Winston said numerous times that he doesn't want to be called a hero, he's one in my book.