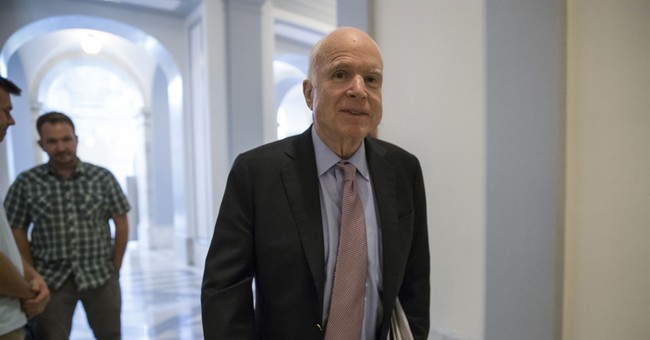 President Donald Trump tweeted a six-minute video on Monday night highlighting the numerous times Sen. John McCain (R-AZ) said that he was going to work to repeal and replace Obamacare. The video contains television clips as well as campaign speeches and advertisements.

A few of the many clips of John McCain talking about Repealing & Replacing O'Care. My oh my has he changed-complete turn from years of talk! pic.twitter.com/t9cXG2Io86

Trump tweeted "My oh my has he changed-complete turn from years of talk!" The tweet was retweeted about 20,000 times in 12 hours, and was favorited by nearly 55,000 people.

McCain returned to Washington in July shortly after being diagnosed with brain cancer to vote against an Obamacare "skinny" repeal bill. McCain also came out against the Graham-Cassidy bill last week.

Regarding the Graham-Cassidy bill, McCain issued a statement saying that he "could not in good conscience" vote for the legislation, and that he hoped there could be a bipartisan compromise in the future.

On Sunday, McCain revealed that doctors had given him a "very poor" cancer prognosis. In July, he was diagnosed with glioblastoma, which is an aggressive form of brain tumors.