Sen. John McCain a 'No' On Graham-Cassidy 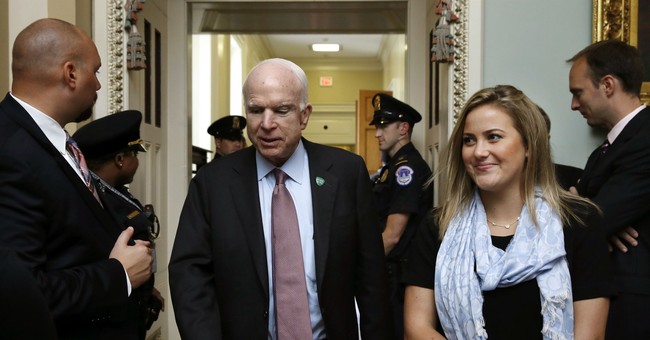 Sen. John McCain (R-AZ) has issued a statement saying that he "cannot in good conscience vote for the Graham-Cassidy proposal." McCain said that he believed that there must be a bipartisan solution to healthcare reform, and that he does not think that Congress has really made a solid effort at this. He also cited his concern that the bill would hurt people, and he wants to see a full CBO score prior to voting.

?????? John McCain: "I cannot in good conscience vote for the Graham-Cassidy proposal." pic.twitter.com/qZf55Yb72D

“I believe we could do better working together, Republicans and Democrats, and have not yet really tried. Nor could I support it without knowing how much it will cost, how it will effect insurance premiums, and how many people would be helped or hurt by it. Without a full CBO score, which won’t be available by the end of the month, we won’t have reliable answers to any of those questions.”

"I take no pleasure in announcing my opposition. Far from it. The bill's authors are my dear friends, and I think the world of them. I know they are acting consistently with their beliefs and sense of what is best for the country. So am I."

McCain's statement all-but-guarantees that this bill will not pass, with Sens. Collins and Rand both signaling that they do not plan on voting for Graham-Cassidy either.