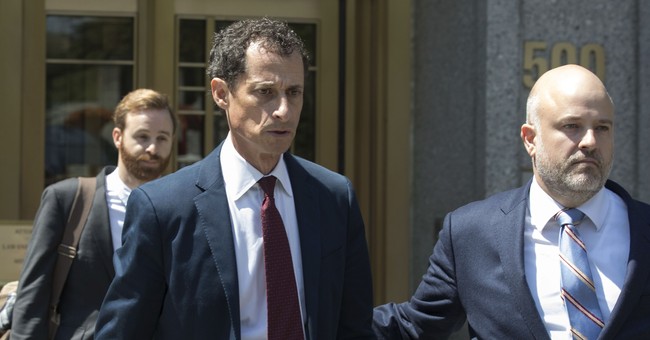 Former Rep. Anthony Weiner (D-NY) will be sentenced on Monday for transferring obscene material to a minor during his online "relationship" with a high school student. Weiner faces up to 10 years in prison, but prosecutors are seeking a two-year sentence between 21 and 27 months.

Last week, Weiner's attorneys argued that he should be spared prison time because his teenage "girlfriend" reportedly wanted to write a tell-all book, and because he did not actually attempt to meet the girl off-line. Prosecutors disagreed with this reasoning and cited his "dangerous level of denial and a lack of self-control" as for why they think the deserves to spend at least some time in prison.

But the U.S. Attorney's office urged the judge not to let the disgraced Democrat off the hook at his sentencing on Monday, citing a "dangerous level of denial and lack of self-control.

"Although the defendant’s self-destructive path from United States Congressman to felon is indisputably sad, his crime is serious and his demonstrated need for deterrence is real," prosecutors wrote.

"The noncustodial sentence that Weiner proposes is simply inadequate; his crime deserves time in prison," they added.

Weiner absolutely should go to prison, and to try to shift some of the blame on the child he communicated with is absolutely despicable. She was 15 years old, and he should have cut off all contact with her when he found out her age. Instead, he pressed on with the "relationship" and committed federal crimes. Given his past misdeeds online, it's clear that he's either an incredibly slow learner or a completely unwilling one. He needs help.