Uh Oh: The Emmys Had Their Lowest Ratings Ever 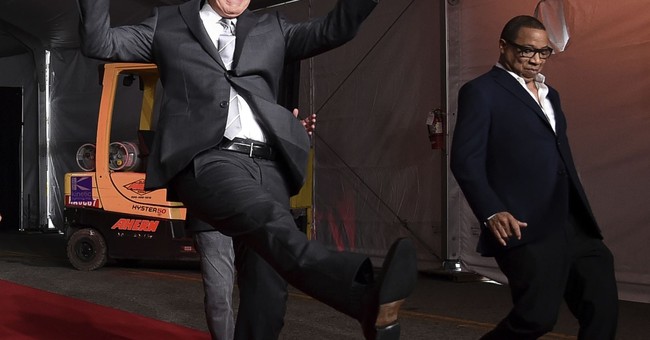 Bad news for Stephen Colbert: Nobody watched the Emmy Awards this year. Only about 11.38 million people watched, which was 10 percent less than last year's show, which was the previous record low number of viewers. Emmy winners included "Veep," "The Handmaid's Tale," and "Big Little Lies."

With 11.38 million viewers tuning into the 69th annual Primetime Emmy Awards is even with last year’s show on ABC, which was the all-time low. The 2016 show was down 5% from the 2015 show, which was the previous low. Among adults 18-49, last night’s Emmys snagged a 2.5 rating. That’s down 10% from the Jimmy Kimmel hosted show of last year, the previous demo low.

The last time more than 12 million people watched the Emmys was 2014, when they aired on a Monday. That year saw more than 15 million viewers.

The Emmy Awards aren't the only awards show to see fewer and fewer viewers. Last month, the MTV Video Music Awards also saw their lowest ratings ever. MTV blamed this on how fewer millennials have cable subscriptions as for why their numbers have been trending downward, but I have a different theory: people are sick of the politics. Like the VMAs, the Emmys were essentially a Trump slam after Trump slam after Trump slam. At some point, it gets old. People don't go to movies or watch television to hear about politics, they do those things for an escape from the real world and from all of the stuff that goes along with it. I bet that if the next awards show advertised itself as being 100 percent free from Donald Trump references and condescending lectures towards the target audience, it'd see record a number of people tune in.

People want to be entertained, not be told how they're unwoke or somehow terrible people. Hollywood should go back to this.