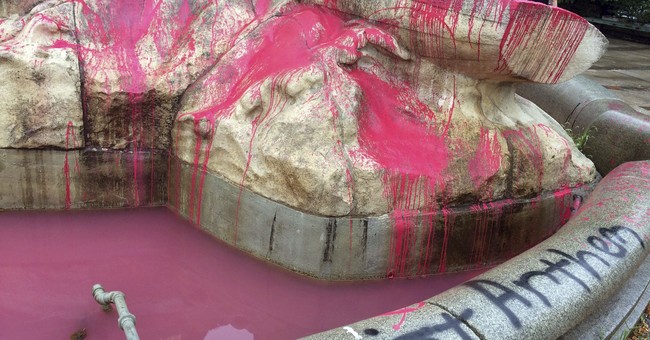 A statue of Francis Scott Key, who wrote the poem "Defence of Fort M'Henry" that would eventually become the Star-Spangled Banner, has been vandalized in Baltimore. Someone splashed the statue with red paint and wrote "racist anthem" on the base. The monument was installed over a century ago and was restored in 1999.

The third stanza of the Star-Spangled Banner, which isn't generally sung, makes a reference to slavery.

And where is that band who so vauntingly swore

That the havoc of war and the battle's confusion,

A home and a country, should leave us no more?

Their blood has washed out their foul footsteps' pollution.

No refuge could save the hireling and slave

From the terror of flight, or the gloom of the grave:

And the star-spangled banner in triumph doth wave,

O'er the land of the free and the home of the brave.

Despite the vandalism, there are currently no plans to remove the statue, and authorities seek to catch whoever threw paint on the statute. This could prove to be a difficult task, however, as there are no suspects and no surveillance footage of the incident.

Historical figures are often complex, and it doesn't do anyone any favors to ignore these complexities and to hold them to modern standards. Hardly anyone who was born before 1960 could claim to have a sufficiently "woke" upbringing, and pretty much everyone has done something problematic at one time or another. Defacing public property is never the answer.