Sean Spicer Finally Got To Meet the Pope 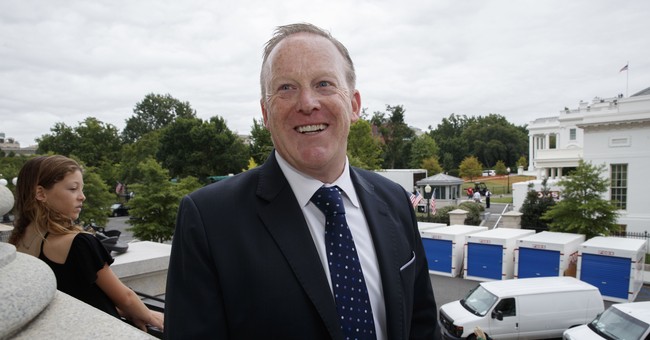 Five months after being left out of President Donald Trump's private audience with Pope Francis, former White House Press Secretary Sean Spicer finally got to meet the Bishop of Rome. Spicer resigned from his position in the White House in late July.

Spicer in the Vatican for the International Catholic Legislators Network's annual meeting, which included a papal audience. Spicer could be seen in the front row, excitedly taking pictures.

Another image released by the Vatican shows Spicer talking to Pope Francis.

President Trump denied that Spicer was specifically left out of the meeting back in May as a snub. However, many were shocked that Spicer, a practicing Catholic, had been excluded.

People on all sides of the aisle were pretty tickled for Spicer.

Want to know why liberals are decent people? We're all pretty happy that Sean Spicer got to meet the Pope.

live shot of Sean Spicer forcing his way into the Vatican to meet the pope pic.twitter.com/m5XGgLfr7E

Oh good, Sean Spicer got to meet the Pope finally. I'm no fan of Spicer, but still, when Trump denied him that it was fucked up.

I'm glad Sean Spicer finally got to meet the Pope today. Spicer sucked at his job but he deserved better than what Trump did to him.