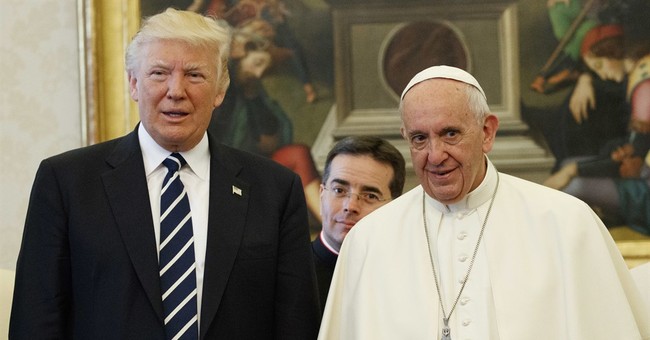 President Trump and Pope Francis met on Wednesday in the Vatican, in what the president called a "fantastic meeting." The two discussed immigration and the need to protect persecuted Christians, and exchanged gifts. The meeting lasted about half an hour.

The president appeared very happy after the meeting, and assured the pontiff that he "won't forget what you said."

Trump gave the Bishop of Rome a first-edition set of Martin Luther King Jr.'s writings. Pope Francis gave him a medallion of an olive tree, which is a symbol of peace, as well as copies of his encyclicals on peace and the environment. Pope Francis has frequently quoted King and appeared to appreciate his gift.

On Twitter, Trump called his meeting with Pope Francis the "honor of a lifetime" and said that he was inspired to pursue world peace.

Honor of a lifetime to meet His Holiness Pope Francis. I leave the Vatican more determined than ever to pursue PEACE in our world. pic.twitter.com/JzJDy7pllI

After meeting with Pope Francis, Trump met with the Vatican secretary of state and the Vatican's foreign minister.