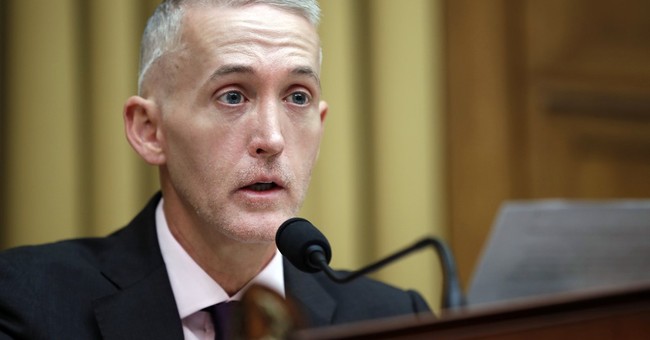 The solar eclipse may have been on Monday, but Rep. Trey Gowdy (R-SC) threw some impressive shade of his own Tuesday afternoon.

Today is Gowdy's 60th birthday, and he celebrated by dunking all over Mick Mulvaney, head of the Office of Management and Budget. Mulvaney posted a series of unflattering photos of Gowdy, saying that he thought someone should give the Congressman a razor and comb for a birthday gift.

What do you get for someone on his 60th birthday? A razor and a comb.
Happy birthday, @TGowdySC. pic.twitter.com/ZNWaPHZl7c

In a cutting reply, Gowdy said that he needed "just a couple of haircuts" to equal the number of people who have quit the White House since the start of the Trump administration. He also added that he "get(s) it" and that Mulvaney is "hard to work with."

I'm just a couple of haircuts away from equaling the number of staff departures by your WH colleagues. I get it. You are hard to work with. https://t.co/sN0dg8ahrU

Well, dang. Who knew Rep. Trey Gowdy had such a strong trash-talk game?

Someone noted that Mulvaney isn't exactly a hair god himself and probably should look in a mirror before criticizing someone else:

This guy is criticizing someone else's hair? pic.twitter.com/IvgXscaRGE

Whereas others were just surprised to see such a sassy tweet from the Congressman: