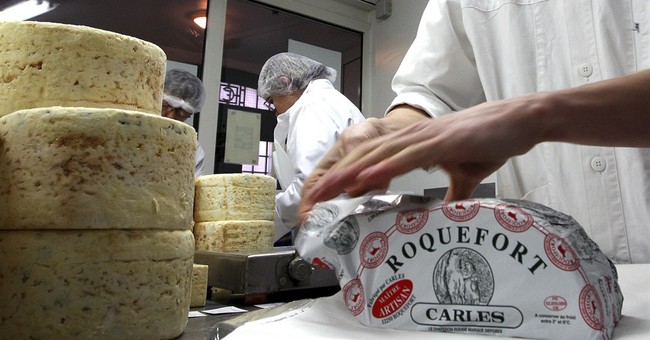 From the same people who declared that milk was a symbol of white supremacy comes this blisteringly-hot take: cheese is the most sexist food there is, cows are regularly raped on farms, and the act of eating cheese is failing to combat sexism.

"Contrary to popular belief*," explains PETA, cows only produce milk when they're pregnant or have just given birth. In order to keep producing milk, PETA describes how cows are "raped" to become pregnant again and again and how their calves are treated immediately after birth.

Can food really be sexist? Yes, when it’s the product of imprisonment, rape, reproductive control, kidnapping, and abuse.

Contrary to popular belief, female cows produce milk only when they’re pregnant or nursing. They make milk for the same reason that human women do: to feed their babies. Cows who are imprisoned on dairy farms are forcibly impregnated through artificial insemination again and again on rape racks. Rape racks. All for your milk, cheese, and yogurt.

PETA investigations have shown that farm workers kick, whip, and jab laboring mother cows and others who had just given birth. Eyewitnesses also filmed workers attaching chains to unborn calves’ legs when their mothers had difficulty giving birth and yanking the babies out of their birth canals, causing the laboring cows to cry out.

First, a question: does PETA have any evidence that cows that are not on farms have any sort of way of issuing consent for reproduction? Does "moo" mean yes? The only species that have sexual relations for pleasure are humans, dolphins, pigs, and some types of monkeys--a list that excludes cows. Second: humans and cows are not on the same moral scale. They are not equals, nor should anyone think they be treated with the same standard. Third: it is absolutely unacceptable to declare an artificial insemination to be a "rape." This is an insult to sexual assault survivors everywhere. Granted, this is pretty par for the course for PETA, but it's worth repeating that this is not an okay comparison.

It seems silly to say that no, eating cheese is not sexist--because of course it's not. It's food. Food isn't sexist, it's nourishment.

*Do people not know this?