No, Poland's First Lady Did Not Snub Trump's Attempt At A Handshake 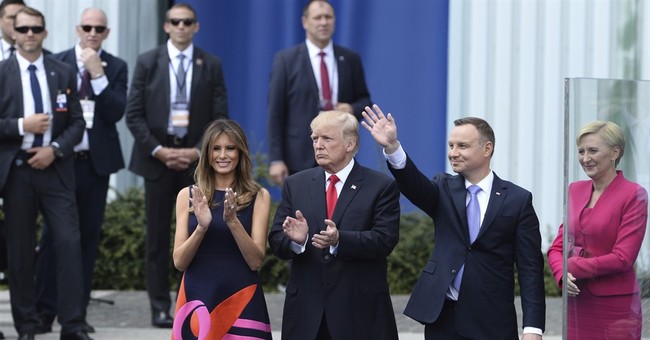 Despite what you may have seen on Twitter, Poland's first lady did not snub President Donald Trump on Thursday. In a widely retweeted video, Polish First Lady Agata Kornhauser-Duda appeared to skip by President Trump and instead shook hands with his wife, Melania. Trump appeared slightly miffed at the "snubbed" handshake.

People were calling Kornhauser-Duda a "legend," and said that her "swerve" was something to be admired.

This swerve by Poland's first lady is smooth af pic.twitter.com/EiyiaXVG61

Poland's first lady is the new leader of the free world pic.twitter.com/tgDUdjY8Tp

CNN's Chris Cillizza had this measured commentary on the whole affair:

And TIME magazine went as far as to say that Kornhauser-Duda "rejected" Trump's handshake.

One small, tiny, insignificant problem: it's not at all true. Immediately after shaking hands with Melania, Kornhauser-Duda turned to President Trump and shook his hand.

Folks, Poland's first lady did not diss Trump's handshake attempt. She was looking at Melania, shook her hand, then shook Trump's. Stop. pic.twitter.com/ta8DNsv0Th

Clearly, Kornhauser-Duda saw that her husband was shaking hands with President Trump, and in the split second she decided to shake Melania's hand, the other handshake ended and Donald Trump reached for her hand. Slightly awkward? Perhaps. Worthy of a thousand thinkpieces? No.