"Broad City" Will Bleep Out "Trump" Next Season 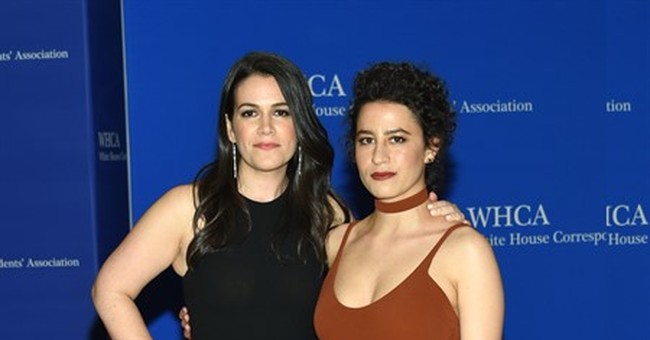 Comedy Central's "Broad City" has announced that it will edit out "Trump" in the upcoming season as though the name of the president were a profanity. In an interview with USA Today, the show's star and co-creator Ilana Glazer said that "Trump" will be replaced with bleeps during the course of the season. Both Glazer and her co-creator Abbi Jacobson were major Hillary Clinton supporters in their both on- and off-screen personas.Clinton even made a cameo appearance in an episode last season.

Glazer told USA Today that one episode of the upcoming season featured her character finding it trouble to be sexually aroused due to the fear created by the Trump administration.

"We wrote (Season 4) being like, 'Here we go! Hillary for president!' " Glazer tells USA TODAY. But after "this game-show host became president of our country, we rewrote a lot."
[...]
But you'll never actually hear Ilana or Abbi say the president's name.
"There's no airtime for this orange (person)," Glazer says. "We bleep his name the whole season."

Back when Trump was first elected, it became a bit of a trend to refer to him online as "Tr*mp" as an act of protest. Now it appears as though this short-lived meme of sorts has spread to the small screen.

Of course, the writers of Broad City have an audience who will probably eat this up. It doesn't make it any less ridiculous, however. The president of the United States' name is not a curse word. It doesn't need to be bleeped out. Imagine if someone tried to do this with Barack Obama, or Bill Clinton--it'd be rightfully derided as absurd and pointless. Trump derangement syndrome is never a good look.

The new season of Broad City begins airing on August 23.