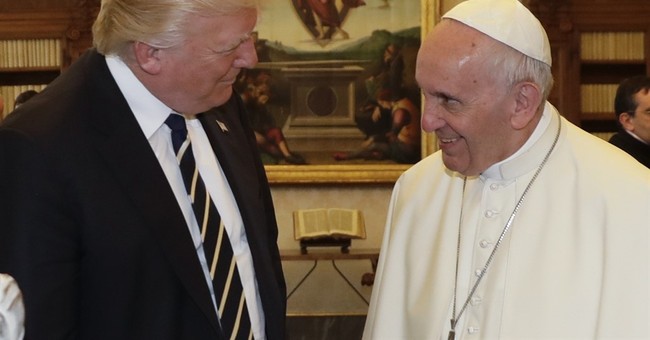 Pope Francis and President Donald Trump met on Wednesday at the Vatican, and a picture of the Pontiff, Melania, Ivanka, and Donald Trump quickly became a meme. Pope Francis appeared less-than-thrilled to be meeting with the Trumps, and people jumped to conclusions that the Bishop of Rome must hate Donald Trump.

One of these things is not like the others pic.twitter.com/9xHnwEat2s

Pope: "You touched the orb, didn't you?" pic.twitter.com/wY5vwF8jDy

Small problem: When a person is as photographed as Pope Francis is, they're bound to make a whole variety of facial expressions. As several people called it, the pontiff has "Resting Pope Face."

And for what it's worth, here are a bunch of pictures featuring a very frowny Pope Francis and various world leaders:

Man. Pope Francis must hate Belgians if his face is any indication in this photo. pic.twitter.com/IYblihq6oQ