Kellyanne Conway Kneeled On A Couch And People Freaked Out 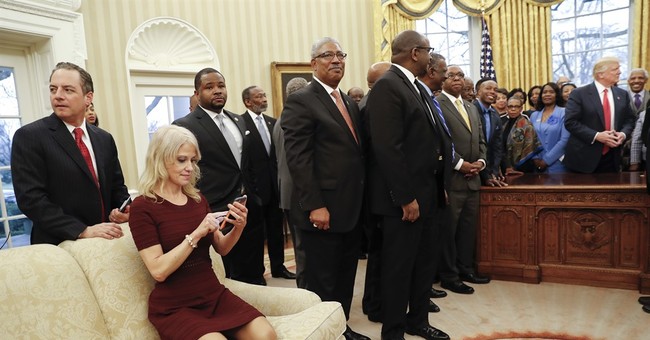 I wrote yesterday about the media freak out over President Donald Trump's steak preference. Not to be outdone, they found another non-news "news" story to write about on Monday evening: Kellyanne Conway put her feet on the couch in the Oval Office.

Media outlets, including the Associated Press, covered shoes-on-couch-gate. "Oval office" as well as "Kellyanne Conway" both trended on Twitter. The image was also featured on the front page of Reddit as a "photoshop battle."

Whether you're Kellyanne Conway or Barack Obama, putting feet on furniture in the Oval Office stirs a frenzy. https://t.co/lapkAyJvmt

Kellyanne Conway has drawn ire and ridicule for making herself at home in the Oval Office https://t.co/pDv4rPAWE8

Remember when Obama 'disrespected the office'?https://t.co/cRpoiB3j3L

Get your fucking feet off the furniture, @KellyannePolls. This isn't your home. https://t.co/12DpukKDkS

Trump was meeting with leaders of HBCUs, which seems to have been completely overshadowed by this whole flap.

For what it's worth, Conway was taking a photo, not playing on her phone.

I mean, come on. We're all very aware of some far more NSFW activities that have taken place in the Oval Office within the last couple of decades. While the photograph may be kind of awkward, it's not malicious and she was not being disrespectful. Deep breaths, everyone.

Let's focus on the real problems of society, alright?