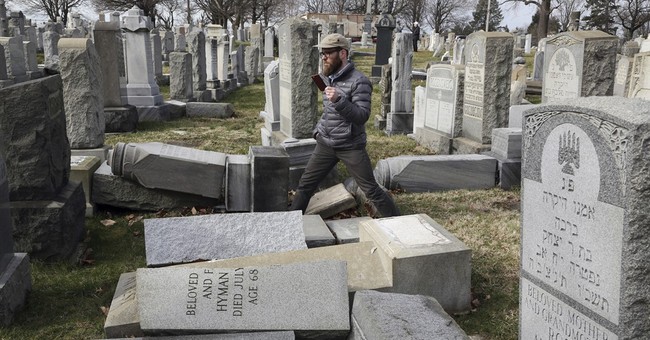 At least two Jewish cemeteries have been vandalized in the past week. Cortney wrote about how VP Mike Pence toured a vandalized cemetery last week in Missouri, and now someone has flipped about 100 tombstones at another Jewish cemetery--this time, in Philadelphia.

#BREAKING: Dozens of headstones at a Jewish cemetery in the #Wissinoming #Philadelphia have been broken and overturned pic.twitter.com/dqP4TeSTld

Another mass vandalism event at another Jewish cemetery. This time in Philadelphia. https://t.co/wBcCUrOTj1

Police have not released any descriptions of a possible suspect or suspects. Philadelphia Mayor Jim Kenney issued a statement saying that "hate is not permissible in Philadelphia" and urged people to stand with the city's Jewish community.

"My heart breaks for the families who found their loved ones' headstones toppled this morning. We are doing all we can to find the perpetrators who desecrated this final resting place, and they will be prosecuted to the fullest extent of the law. Hate is not permissible in Philadelphia. I encourage Philadelphians to stand with our Jewish brothers and sisters and to show them that we are the City of Brotherly Love and Sisterly Affection."

In a show of interfaith solidarity, a group of Muslims were among the people who helped to clean up the toppled stones.