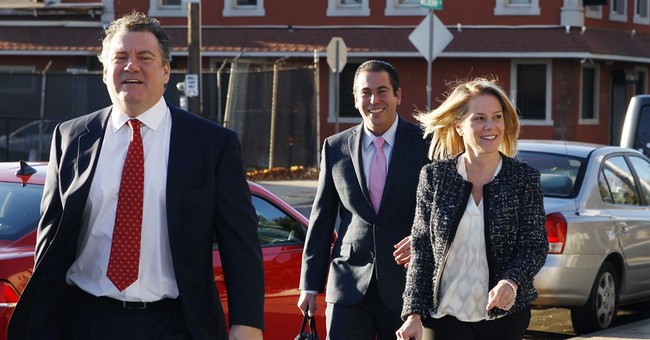 Two former Gov. Chris Christie aides have been found guilty of all counts for their role in the 'Bridgegate' scandal that has plagued Christie's second term. Bridget Kelly, Christie's former deputy chief of staff, and Bill Baroni, a Christie appointee to the Port Authority of New York and New Jersey, were both found guilty of the nine charges against them. They face up to 20 years in prison.

The pair was charged with intentionally disrupting traffic at the George Washington Bridge as payback for the mayor of Fort Lee declining to endorse Christie in his re-election bid. Kelly claimed that she thought the lane closures were part of a traffic study.

Prosecutors said Kelly and Baroni plotted with Christie ally David Wildstein to close lanes at the bridge and create gridlock in September 2013 to punish the Democratic mayor of Fort Lee for not endorsing Christie for re-election. Wildstein, a high-ranking Port Authority official, pleaded guilty to orchestrating the scheme and was the prosecution's star witness.

Kelly and Baroni testified they believed the lane closings were part of a legitimate traffic study because, they said, that was what Wildstein told them.

The defense portrayed Wildstein as a liar and a dirty trickster - "the Bernie Madoff of New Jersey politics" - and argued that Christie and his inner circle had thrown the 44-year-old Kelly under the bus.

Sentencing will be held on February 21.