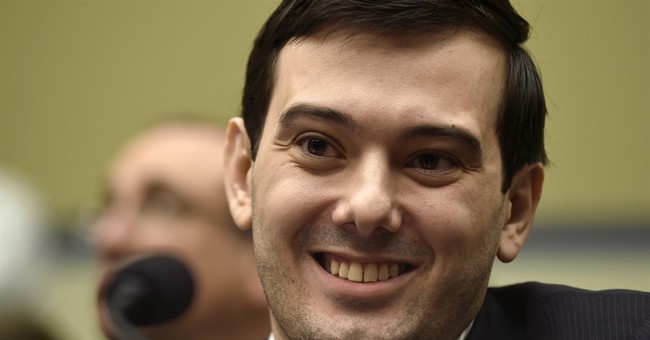 Martin Shkreli, the "pharma bro" who made headlines last year after his company, Turing Pharmaceuticals, drastically raised the price of a toxoplasmosis drug, is auctioning off the chance to "punch/slap" him in the face in order to raise money for the son of a friend who recently passed away. Shkreli announced the rather unusual fundraiser on his Twitter account, and claimed that people are already bidding into the mid-five figures.

I will auction one slap/punch in the face to benefit my friend Mike who passed away & leaves behind a young son who survived cancer. DM bids

Donate now and a winning slapper/puncher will be selected. Not seeing much donation relative to media exposure.https://t.co/29bdZWJmkP

I'm matching the donation amount and each dollar donated gets you a raffle ticket to punch, slap, have, dinner, or even a date, with me.

Milley Details Nancy Pelosi's Attempt to Take Over the Chain-of-Command
Katie Pavlich
Are We Shocked That This Happened to Liz Cheney?
Matt Vespa
The Marine Who Called for Afghanistan Accountability Has Been Thrown in Prison
Katie Pavlich
Border Patrol Union President Says He Would Arrest Biden for His Disastrous Handling of the Border
Julio Rosas
New Talking Point: Biden's $3.5 Trillion Tax and Spend Binge Actually Costs 'Zero' Dollars, You Know
Guy Benson
ACLU Apologizes for Editing RBG Quote...But Has a Strange Excuse for Why It Did
Leah Barkoukis
CARTOONS | AF Branco
View Cartoon
Most Popular