Clemson Bans Harambe Jokes Because Rape Culture and Racism, Or Something 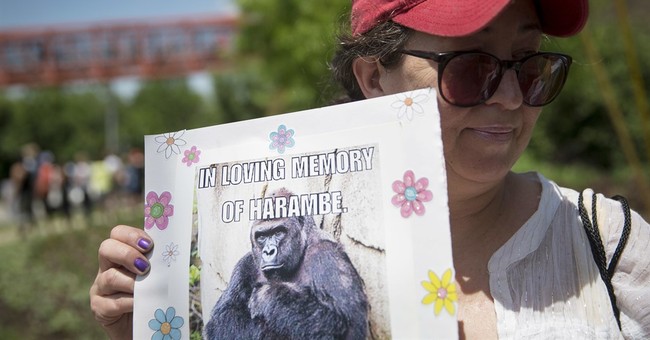 While the rest of the nation mourns Harambe, the gorilla shot and killed in Cincinnati after a child entered his enclosure, Clemson University officials aren't having it. The school banned all Harambe memes because they apparently promote racism and rape culture.

A Clemson administrator sent an email to Resident Advisors (RAs) Friday instructing them to demand that freshman remove all Harambe references from dorm hallways and windows.

The administrator claimed Harambe’s death has been used to “add to rape culture” and can be “form of racism.” An RA further added that any student who disobeys these instructions will be “in trouble.”

“We are no longer allowing any reference to Harambe (or any other spelling) to be displayed on doors, halls, billboards, or windows,” the instructions state. “Harambe should not be displayed in a public place or a place that is viewed by the public.”

Since Harambe's most tragic demise, he's become a bizarre internet phenomena that has swept the country. "RIP Harambe" signs are appearing at everywhere from golf tournaments to national political conventions. Everyone is making Harambe jokes--even author J.K. Rowling.

I thought it was very funny, btw.

One popular phrase used in conjunction with Harambe is the rather profane "D---- out for Harambe"--which, while crude, hasn't actually resulted in groups of people running around sans trousers in honor of the dead primate. It's likely that some variant of this phrase sparked the Haram-ban over at Clemson. However, while it may not be exactly polite to scream about exposing oneself in public, this isn't actually a thing that's happening and to equate it as a Title IX violation is insane.

There are actual problems in the world. Gorilla memes aren't one of them.