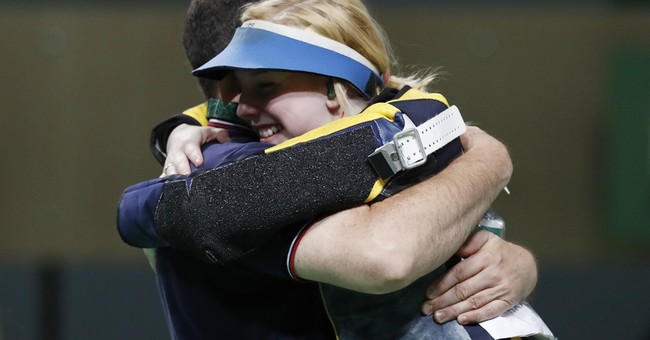 On Saturday, American Ginny Thrasher won the first gold medal awarded in the 2016 Rio Olympics, in the 10m air rifle competition. Thrasher, a 19-year-old college student, won a huge upset victory over the heavily-favored (and defending Olympic champion) Chinese shooters. Nobody predicted that she'd medal in Rio, and her win was the first victory in air rifle for the U.S. since 2000.

Naturally, Piers Morgan had to try to take away from her incredible victory by making fun of the sport she played, tweeting that it was the "least surprising breaking news ever" that an American athlete had been victorious in a shooting sport.

To USA Shooting's credit, their reply to Morgan was far kinder than his dismissive tweet deserved. They reminded Morgan that the weapon Thrasher used in today's event was a pellet gun, she was not the favorite to win by a long shot (pun very intended), and that there are athletes competing in shooting sports from his home nation as well.

@piersmorgan Thanks for trolling. Realize it was a pellet gun, she defeated heavily favored Chinese, & 6 proud @GBShooting reps are in Rio 2

There's nothing wrong with competing in shooting sports, and Thrasher should be praised rather than mocked online for her accomplishment. While the U.S. has consistently medaled in shooting sports, the past 20 years have been dominated by the Chinese, Russian, and South Korean teams. Success in shooting sports is hardly a reflection of the crime rate of the competing nation, despite what commentators like Morgan are trying to imply.

Least surprising breaking news ever: Piers Morgan is a jerk.