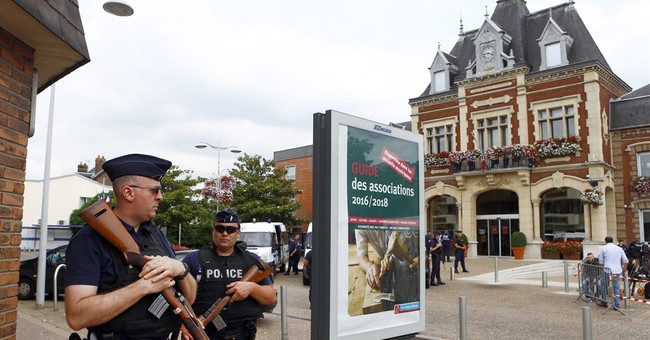 The terrorist who slit the throat of 85-year-old priest Fr. Jacques Hamel today in Normandy, France had previously been arrested on terrorism charges and was was sentenced to house arrest with an electronic monitor. He spent a year in prison after being arrested in Turkey attempting to reach Syria and join the Islamic State. He was granted unsupervised release periods from his parent's house between the hours of 8:30 a.m. and 12:30 p.m. The attack occurred during the church's 9 a.m. Mass.

The church attacked on Tuesday morning was reportedly on an ISIS list of potential targets discovered in April 2015. The suspect in today's attack lived near the church.

Security sources said one of the murderers was a convicted terrorist who was being monitored with an electronic tag and should have been living with his parents.

He was allowed out unsupervised between 8.30am and 12.30pm. The mass[sic] at Saint Etiennce's church started at 9am.

The same source said the church was one of a number of Catholic places of worship on a hitlist, discovered on an ISIS suspect in April 2015 - raising serious questions about France's intelligence agencies.

It's not exactly rocket science that giving a convicted terrorist periods of unsupervised release may not exactly be the best idea. A person can commit acts of terror around the clock, and clearly the terrorist in question didn't care about violating house arrest rules as he was willing to take a church hostage and slit the throat of an elderly priest.

Let's hope that this unspeakable act of depraved violence causes French authorities to wake up to how insane their criminal justice laws are. Convicted terrorists should not be walking around unsupervised.

This post has been updated to correct Fr. Hamel's age