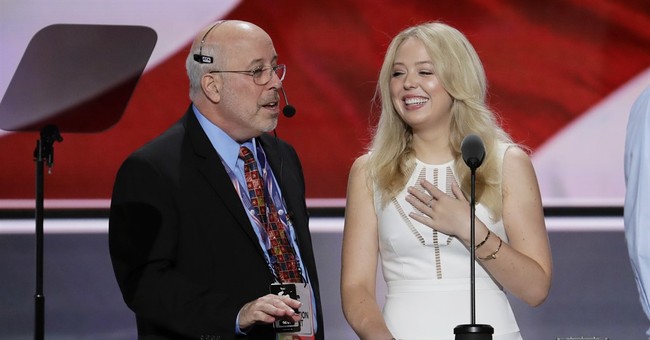 Tiffany Trump, Donald Trump's second-youngest child, delivered a brief, yet touching, speech at the RNC highlighting the side of her father that most do not get to see. Tiffany, unlike her older siblings, has largely stayed out of the spotlight during the campaign until Tuesday night.

Tiffany highlighted her father's drive and said that his "defining qualities" are that he gives his all into whatever he is doing, and that he does things well. He also has the ability to make others strive for greater things, and to motivate others to work hard and remain true to themselves to reach their full potential.

"His desire for excellence is contagious. He posses a unique gift for bringing that trait out in others, starting with those closest to him."

These, according to Tiffany, are ideal characteristics for both a father and the president of the United States.

Tiffany recounted a cute anecdote of how her father would write notes on her report cards, even dating back from kindergarten. According to her, Donald would not focus on her grades, but on her teacher's comments on her behavior in and out of the classroom--the opposite of what one would expect him to do. She also told a story of how her father was the first person to call to console and support her when a close friend passed away.

"It is the small, loving acts that help an enormous amount during times of grief."

She then explained how although her father is always one to give advice, he tends to keep things relatively brief. She cited the "Trump formula" of fearlessness, passion, and drive that led to her family's success.

"If you do what you love, hold nothing back, and never let fear of failure get in the way, then you've pretty much figured out the Trump formula."

Tiffany described her father as a "natural born encourager" who she enjoys introducing to her friends who already have developed preconceived notions about him. Tiffany said that her father is a funny, strong, protective, kind, and endearing man, whom she is "so proud" to call her father.

"I never pictured myself saying all of this to a packed arena, but I am grateful and fortunate for the chance. I have admired my father all my life, and I love him with all of my heart."

Tiffany's speech was well-received on Twitter, where many applauded her for her poise and grace.

Tiffany Trump has always seemed smart and unusually self-possessed for her age. That was a good speech, well delivered, for a 22 year old.

Tiffany Trump speech, simple and personal, may be the most compelling moment of the #RNCinCLE so far