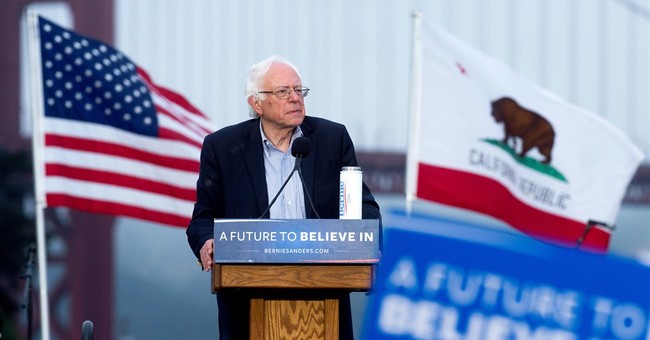 Following a rough election night that saw him winning only in North Dakota and Montana, Sen. Bernie Sanders (I-VT) took the stage in Santa Monica, CA and thanked his supporters, "tens of thousands of volunteers" in California, and reminded everyone that they are part of a political revolution that will change the United States.

Despite Hillary Clinton securing the number of delegates needed to clinch the Democratic nomination, Sanders insisted that he is going to stay in the race through the Democratic National Convention in Philadelphia this July. Sanders intends on winning the Democratic primary next Tuesday in Washington, D.C.

BREAKING: Bernie Sanders says he will 'continue the fight' in the last primary of the Democratic campaign next week in Washington, D.C.

In his speech, Sanders emphasized the importance of his younger supporters, and said he was "enormously optimistic about the future of the country." He reiterated how it was key to ensure that "right-wing Republicans" are never in control of the government, and how this was "especially true" now that Donald Trump is the presumptive Republican nominee.

Sanders said that he hopes his supporters will continue working towards their goals of social justice, economic justice, racial justice, and environmental justice.

Sanders closed his brief speech by reminding everyone that "The struggle continues," and exited the stage with a wave.