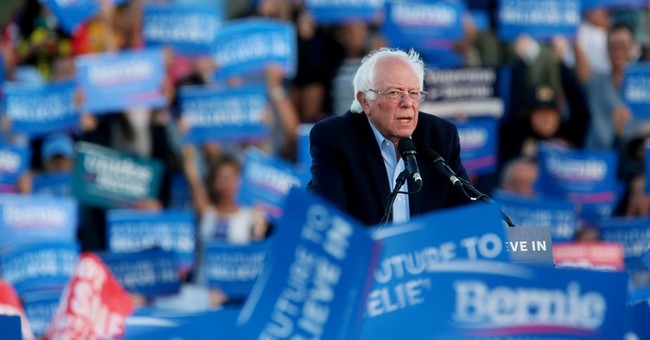 It looks as though the Bern might be dwindling out. Sen. Bernie Sanders (I-VT) will "assess" his campaign and any potential path to victory following the California primaries on Tuesday, The Hill reports. It is nearly a mathematical certainty that Hillary Clinton will clinch the Democratic nomination in tomorrow night's primaries, but that might not be stopping Sanders from exiting the race.

“Let’s assess where we are after tomorrow before we make statements based on speculation,” Sanders told reporters in California when asked whether he would step aside if he loses on Tuesday night.

“We are speculating before what is in fact the most important primary.”

He added that he would be flying back to his home in Vermont after the California primary.

Sanders took a similar trek back to Vermont back in April to "recharge." Obviously, he decided to stay in the race after that bit of a breather.

This time, however, it's obviously a bit different. Sanders has fewer delegates than Clinton, and fewer popular votes. Despite what his fanboys insist, he's simply not winning and time is running out. Short of some crazy shenanigans at the DNC this July (which I'll admit are entirely plausible), Sanders will not be the nominee come November.

The bigger question, and one that should have the Democratic Party at least a little bit concerned, is what will happen to the "Bernie Bros" once Sanders departs the election. While some of them will definitely stick with the party and vote for Hillary, there's a significant chance they'll follow Susan Sarandon's lead and go with Trump as the "anyone but Hillary" candidate. A not-small percentage of Bernie supporters are "#NeverHillary"--meaning that these people will likely either go third party, vote for Trump, or not vote at all. This could spell doom for the Democrats.

With all of the craziness on the Republican side of the election, it's been understandable that the drama on the Democratic side has flown relatively under the radar. If Sanders wins California, however, things could get even more interesting in the coming weeks.