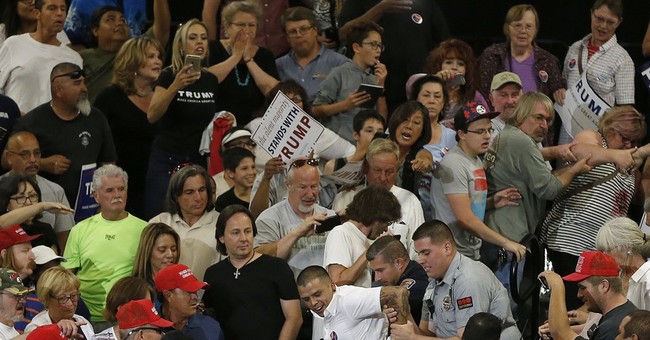 The scene outside of a Donald Trump rally in Albuquerque, New Mexico descended into chaos as anti-Trump protesters first broke through a barrier, lit things on fire, and threw rocks at police officers.

Protesters shouting "fuck Donald trump!" (And playing the song) as cops on horses tell them to disband. pic.twitter.com/FCrnzQKezj

Shit is going ham at this trump rally pic.twitter.com/Dq0h0lFKM5

Protestors are now throwing bottles and rocks at our Police Horses.

Some form of smoke bomb or pepper spray was used by the police to break up the protesters. The protesters were primarily opposed to Trump's proposals on immigration.

The smoke that has been seen is not tear gas, it's just smoke. We have not deployed tear gas at this time.

There were also protests inside the rally, and Trump's speech was interrupted several times.