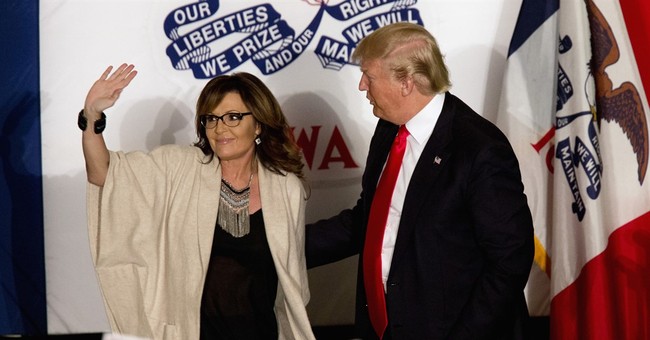 Ben Carson--who the Washington Post called the both best and worst campaign surrogate of all time--revealed that former Alaska Governor Sarah Palin, among many others, is on Donald Trump's shortlist for potential running mates.

[...]He had just explained to the reporter riding along that he wanted no role in a Trump administration when news arrived of a new poll naming him as the best liked of a list of potential running mates.

“Who else was on the list?” he asked quietly, maintaining his usual inscrutable calm. The most favorably regarded contenders after himself, he was told, were John Kasich, Marco Rubio, Ted Cruz, Sarah Palin and Chris Christie.

“Those are all people on our list,” he said.

“Well, not you,” Candy reminded him sharply.

That the Trump campaign might want their potential VP picks held close to the vest didn’t seem to occur to Carson. He’s not the type to keep his candid thoughts to himself.

It'd certainly be an unorthodox pick if Trump were to go with Palin--she hasn't really had a major presence in the political arena in quite a while, and her recent appearances on the national stage have been...in serious need of polish. I don't see how adding Palin to the ticket would improve Trump's chances of winning the presidency.

Granted, there's still plenty of time for Trump to figure out his VP pick. Mitt Romney and John McCain didn't announce their choices until August. Since the RNC is considerably earlier this year than in past election cycles (in late July), I'd say that Trump doesn't have to make a decision for another month or so.