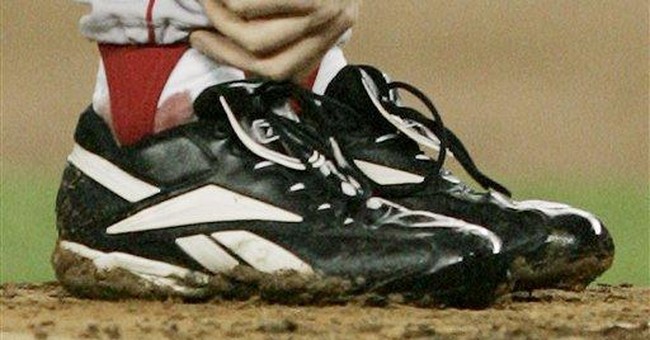 ESPN has edited out footage from Curt Schilling's "bloody sock" game in the 30 for 30 documentary Four Days in October. The documentary now skips from game five to game seven, completely omitting any mention of Schilling's performance. Schilling was recently fired by ESPN.

Apparently Schilling also thinks that ESPN counts among the reasons why Patriots quarterback Tom Brady had his four-game suspension reinstated by a federal court. But what set him off Sunday was hearing that the evening’s telecast of “Four Days in October,” ESPN’s 2010 documentary about Boston’s stunning comeback from a 3-0 deficit against New York to reach, and eventually win, the World Series, was missing his crucial Game 6 performance.

The recounting of that performance, and Game 6 in general (including Alez Rodriguez knocking a ball out of reliever Bronson Arroyo’s glove), takes up about 17 minutes of the original version of the hour-and-five-minute-long documentary. ESPN apparently wanted to trim “Four Days in October,” which aired on ESPN2 after an Arizona-Oregon softball game and was likely timed to precede a live Red Sox-Yankees telecast on the main channel, down to fit into an hour-long time slot, with commercials.

While ESPN claims that the segment featuring Schilling was edited for time reasons, this seems a little suspect. (Full disclosure: despite her New England upbringing, this author is actually a fan of the New York Yankees.) The bloody sock game was a huge deal and it was a major turning point in the series. It doesn't make any sense to omit that from a documentary about the rivalry and that season.

Schilling, to his credit, had jokes:

For sale, never used, rarely worn ring from player who didn't actually have anything to do with getting it. pic.twitter.com/6qWxO3uRDN

So what do you think? Is ESPN "whitewashing history?"