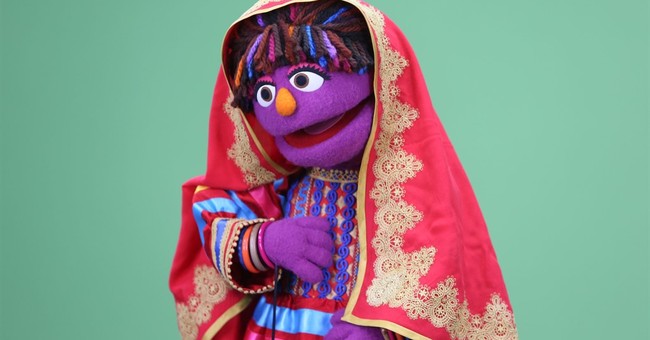 The Afghanistan edition of Sesame Street will be getting its very own exclusive muppet, a girl named Zari who is designed to teach Afghani children about female empowerment. Sesame Street mainstays such as Bert, Ernie, Grover, and Elmo already appear on Baghch-e-Simsim ("Sesame Garden"), but Zari is the first muppet that is specific to the region.

Zari is modeled after a 6-year-old girl and will wear a variety of clothing, including a hijab "when appropriate." As Afghani girls are required to wear a white veil with their school uniforms, Zari's school outfit will include one as well.

Zari's primary role is to showcase how a woman can go to school and have big career goals. Afghanistan has very high rates of child marriage and domestic abuse, so it's hoped that exposing children to a positive female role model at a young age could shift some of these attitudes for the next generation.

As she interacts with the humans and friendly monsters that populate the world of Baghch-e-Simsim, Zari quietly transmits values of kindness and empowerment. She teaches children to be nice to their friends, to greet them with “asalaam alaikum.” She shows young viewers how to stay fit through stretches and playing sports. Above all, Zari is inquisitive, an endless wellspring of curiosity. She is excited to study at school, to view artifacts at a museum. In multiple segments, she interviews Afghan professionals — a pediatrician, a conductor, a female volleyball player — about their jobs, and what it would take to attain those jobs herself. The message to Baghch-e-Simsim’s young audience, and to girl children especially, is that a life of learning, good health, and professional success is possible.

While some were concerned about the idea of a Muslim, hijab-wearing muppet, reactions to Zari have largely been positive.

Personally, I think this is a great idea. While it's extremely sad that "treat women like people" is something that has to be taught to young children, any kind of educational effort is a good thing and could hopefully improve the lives of women in Afghanistan down the road. The purpose of the muppets on Sesame Street is to teach children without them realize they're being taught--Bert and Ernie, for instance, are designed to teach children that it's okay to be friends with someone who isn't exactly like you. Young children are incredibly impressionable, and while steps like these may seem trivial, they could help.