Donald Trump: Michelle Fields Made Up Being Assaulted; UPDATE: He's Making Jokes About It 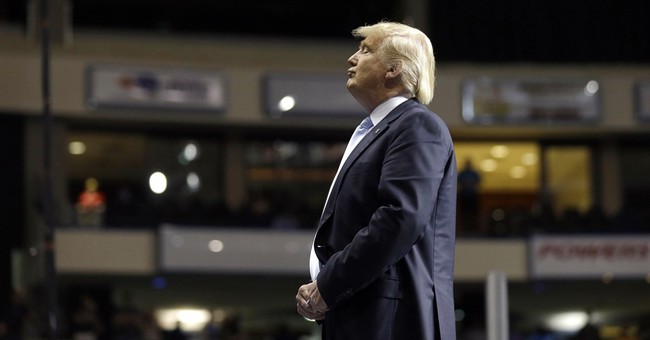 On Tuesday, Breitbart reporter Michelle Fields was assaulted by Donald Trump's campaign manager Corey Lewandowski. The Trump campaign later accused Fields of lying about the incident. Now, The Donald himself has weighed in, via CNN's Dylan Byers:

#Break: Donald Trump just told me he thinks that the Michelle Fields incident didn't happen. "I think they made it up."

I guess these just magically appeared on me @CLewandowski_ @realDonaldTrump. So weird. pic.twitter.com/oD8c4D7tw3

And an audio and written transcript of what happened:

A few moments later (noise of the room can be heard)...

Terris: “Yea he just threw you down."

Fields: “I can’t believe he just did that that was so hard. Was that Corey?"

Fields: "That was insane. You should have felt how hard he grabbed me. That's insane. I’ve never had anyone do that to me from a campaign."

Terris: “Can I put that in my story?"

Fields: “Yeah, go for it — that was really awful. That’s so unprofessional.”

Terris: “He really just almost threw you down on the ground."

Fields: “He literally went like this and was grabbing me down. I don’t even what to do [about] what he just did to me. Oh my God, that really spooked me that someone would do that."

Terris: “What threat were you?"

Fields: “Nothing. I was asking about affirmative action."

Terris: “And he probably knows you, right?"

Fields: “Yeah, I don’t understand. That looks horrible. You’re going after a Breitbart reporter, the people who are nicest to you?"

And an admission by Lewandowski himself:

Oh, he thought she was a mainstream reporter, totally reasonable to assault her in that case https://t.co/ZBm3GPtkLZ pic.twitter.com/ispedgH0FE

Trump just looked at this female reporter in orange and said "if you go down, it's not my fault" #GOPDebate pic.twitter.com/vNtRcLaAA2