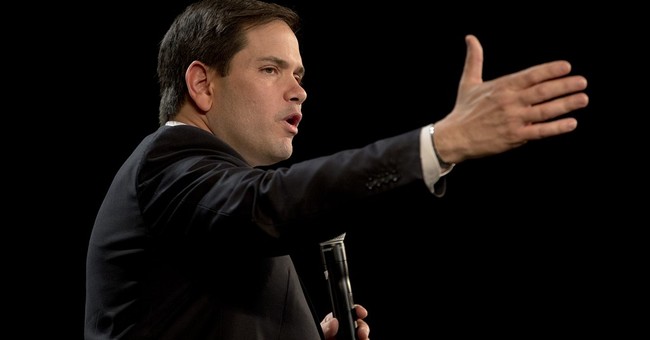 Republican presidential candidate Sen. Marco Rubio (R-FL) will reportedly not be in attendance at CPAC, the Conservative Political Action Conference, it was announced today. Donald Trump, Sen. Ted Cruz (R-TX), and Dr. Ben Carson are all still planning to attend and address the event.

In a statement, the American Conservative Union (ACU) slammed the decision to skip the conference as a "rookie mistake."

Although, Marco Rubio has built a conservative record and has a high ACU rating, he and his campaign have made a rookie mistake. Today the Rubio campaign informed ACU’s chairman that their candidate is unwilling to make time to meet with activists and answer their questions at CPAC 2016. Sen. Rubio cannot have it both ways: he cannot hope to be the inspirational leader of conservatives and at the same time hide at the very moments when activists who compose the heart and soul of the movement assemble and organize. For 43 years CPAC has been that critical moment, and in this year’s conference will be the biggest yet.

Ronald Reagan came to CPAC 13 times; he launched his national political career from CPAC and our theme this year comes from President Reagan’s first public address after his 1980 election. That theme is ‘Our Time is Now.’ Reagan’s words ring even truer today than when Reagan first said them. If we do not carry the country in 2016 America will be a different nation. But if conservatives are not central to the effort we will fail before we even begin.

We also appreciate those candidates and former candidates who have made CPAC 2016 a priority: Donald Trump, Ted Cruz and Ben Carson, Scott Walker and Carly Fiorina (our former Foundation Chair.) They honor Reagan’s legacy and they honor the thousands of conservative activists who will spend significant resources to travel to CPAC to learn, be inspired, and eventually vote in our straw poll for the person they want to carry the Reagan torch.

Although @marcorubio has built a conservative record & high ACU rating, he & his campaign have made a rookie mistake by not attending #CPAC.

It should be noted that there is a debate scheduled on the second day of the conference, Thursday March 3. The Rubio campaign said that the March schedule is not yet set. The senator spoke at last year's event.

UPDATE: The Rubio campaign is denying that they gave the ACU an explicit "no."

UPDATE 2: Our friends over at RedState have more emails.

wanted Marco at CPAC, have worked for mths w various staffers to secure. In the end they did not want to commit. it was always their call