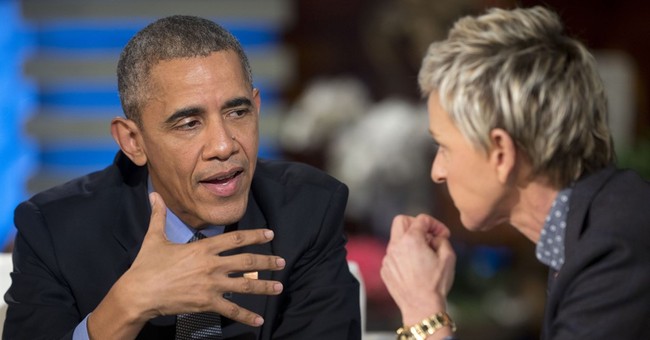 Appearing on The Ellen Degeneres Show today, President Obama was read a love poem from his wife, Michelle, and explained why he wouldn't be speaking at his daughter Malia's graduation from the Sidwell Friends School later this spring. According to Obama, who considers his eldest daughter to be one of his best friends, he turned down an offer to speak at her graduation because he will be "sitting there with dark glasses, sobbing."

Obama also revealed that he has considered going out in disguise and talked about how hard it will be to send daughter Malia off to college in the fall.

"She's one of my best friends. It's going to be hard for me not to have her around all the time, but she's ready to go," Obama said of his 17-year-old daughter, a senior at the exclusive Sidwell Friends School in Washington. "She's just a really smart, capable person and she's ready to make her own way."

He said he declined an invitation to speak at her upcoming graduation. "I said 'absolutely not,' because I'm going to be sitting there with dark glasses, sobbing," Obama said.

Malia, 17, has not yet announced where she will be attending college, but visited some pretty prestigious schools during her college application process.

At the end of the day, despite partisan differences, it's important to remember that the president is still a human being with normal, fatherly feelings.