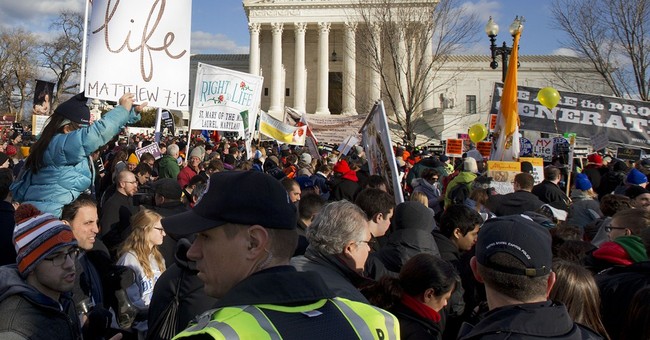 Today is both the March for Life and the anniversary of Roe v. Wade. Let's take a look at how the top-performing candidates from each party commented on the day:

"Women need more than a vote or a supportive statement; we need a fighter in the White House." -Cecile Richards

Hillary posted a link on her Facebook page that included praise from Cecile Richards, the head of Planned Parenthood.

The decision handed down by the Supreme Court 43 years ago in Roe v. Wade guaranteed a woman’s right to choose.

As president, I will do everything that I can to protect and preserve a woman’s right to an abortion. #Roe43

I join with Planned Parenthood, NARAL and all Americans who have been fighting the never-ending attacks on women’s right to choose. #Roe43

I will fight attempts to undercut Roe v. Wade, resist attempts by states to deny access to abortion and we will rescind the Hyde amendment.

I would expand initiatives that protect women’s health, access to contraception, and the availability of a safe and legal abortion. #Roe43

Standard stuff from Sanders, who has been vocally in favor of abortion throughout his career.

I always stood up for women's health & a woman's right to choose as Gov, I will never stop fighting for those rights as President. #Roe43

As of Friday at 5:00 p.m., Trump has yet to comment on either side of the issue.

It doesn't look all that great for a candidate who is currently the frontrunner of a major political party with a pro-life platform to be entirely silent on the issue on a pretty notable day. Firing off a tweet takes all of seconds, and in this case, his silence is speaking pretty loudly.

Today thousands of students/families/churches have traveled to DC to #MarchForLife & lift up our nation in prayer https://t.co/yFga9rg03A

Each life is a gift from God. Without #life, there is no #liberty. We stand united for life. #MarchForLife pic.twitter.com/aXqJWTMc9M

Cruz tweeted support for the March for Life.

Rubio tweeted an op-ed defending life as well as support for the March for Life.

The sanctity of human life is something that we must wholeheartedly promote and enforce. As President, I will defend life. #WhyWeMarch

I applaud those who #MarchforLife today. As president I'll fight for human dignity & the unborn. New @FoxNews op-ed: https://t.co/flzntbl7wq

Bush tweeted an op-ed as well as his support for the March for Life.

(For what it's worth, Bush tweeted out a graphic of a Hillary Clinton quote hitting Trump for his past support of partial-birth abortion.)