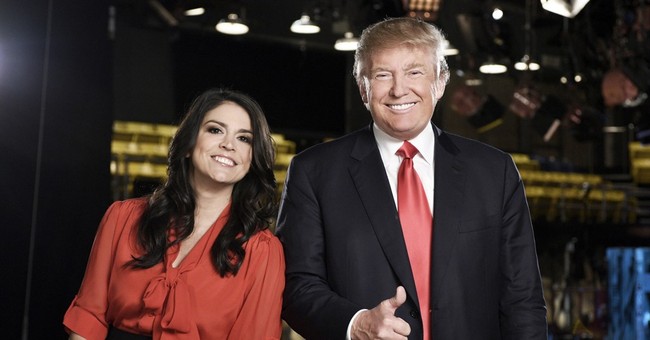 The episode started out on a decent note with a cold opening lampooning MSNBC's "Democrat Candidate Forum" and Hillary Clinton's ever-changing accents and inability to speak "casual English." Larry David reprised his role as Bernie Sanders, and went on a rant about how he wants his supporters to donate "vacuum pennies."

Unfortunately, the episode went downhill from there.

Trump's monologue was passable, with a sly joke at the expense of SNL cast member Aidy Bryant, whom Trump assumed to be Rosie O'Donnell. He was joined on stage by Darrell Hammond and Taran Killam, who have both played the role of Trump.

It's a Trump reunion. #SNL pic.twitter.com/v9b5WnpWkv

The real highlight of Trump's monologue, strangely enough, did not come from Trump himself. Larry David "heckled" Trump, screaming "Trump's a racist" and explaining that he only said that for the $5,000 bounty. (For what it's worth, the group Deport Racism plans on giving David the reward money.) Despite the threats of protestors and disruption, nothing came into fruition.

The sketches, unfortunately, were just simply not good. A sketch that initially appeared to be a preview of President Trump's first term (ISIS leaders are now blackjack dealers at Trump casinos, Apprentice villain Omarosa is secretary of state, China is borrowing money from the U.S., etc) turned out to be an ad for the "The Melania for First Lady Foundation." Ivanka Trump made a surprise cameo, and exactly zero people in the audience recognized her--leading to an awkward moment where absolutely nobody applauded. This was followed by a decidedly "meh" short featuring the women of SNL's cast performing a song about being a "bad girl." While their past efforts at songs have been quite funny, this simply wasn't on that level.

One quasi-bright spot was the next sketch, which featured Trump "live tweeting" offensive commentary on the actors. Unfortunately, they were merely fake live tweets, instead of actual tweets from Trump's account. Trump then partook in a parody of Drake's "Hotline Bling" music video, which will live on in the form of .gifs until the end of time.

My personal favorite part of the episode came at the hands of Bobby Moynihan's "Drunk Uncle" character spewing his thoughts on the presidential election during Weekend Update. Drunk Uncle, a huge Trump supporter, shattered a glass when asked about his thought of Hillary Clinton, and discussed how he's overjoyed that Trump is going to "make America grapes again."

After Weekend Update, the episode quickly descended into "how on earth did these sketches make it out of rehearsal" territory, and were largely forgettable and unfunny.

Sia, the musical guest, was phenomenal, and performed the songs "Alive" and "Bird Set Free" while wearing a giant wig that covered the majority of her face. While the visual was a tad weird, the vocals were outstanding.

Greg Gutfeld summed up the episode quite well, musing that perhaps the SNL writers purposefully made the show sub-par as a form of protest.

They deliberately wrote nothing, as a protest. It's like a restaurant cook spitting on someone's food.

While I'm not 100 percent sold on this theory, it seems plausible. SNL is certainly far-removed from its golden era (although I'm a big fan of Kate McKinnon, Aidy Bryant, Michael Che, and Pete Davidson), this episode was the worst I can remember watching in recent memory. SNL has a talented, funny cast--they just didn't deliver on tonight's episode.

I'm still not entirely sure why Trump agreed to host SNL. I doubt that it converted many people who are on the fence into Trump supporters, it wasn't funny, and it was just an overall bland episode that everyone would have ignored if it weren't starring someone who could feasibly be elected president of the United States in just over a year.

Trump was an attempt to bring in big ratings, and NBC probably received what it was looking for. It's a shame that an episode that will likely be the highest-rated of the season was one that was so poorly written. Trump would have likely been more effective as a cameo rather than a host.