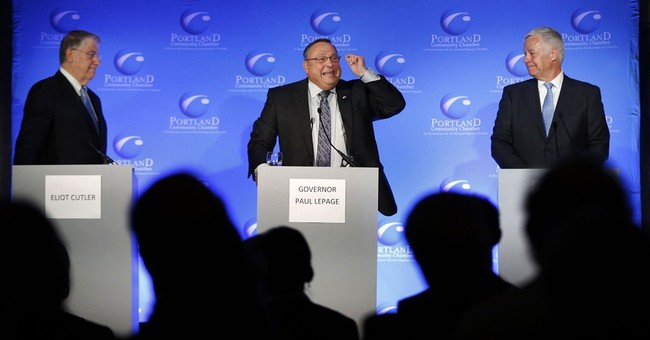 According to a new Portland Press Herald poll, Gov. Paul LePage (R) may be running away with the race as Election Day draws near. The poll of 639 likely voters had LePage up a whopping 10 points over Rep. Mike Michaud (D). Eliot Cutler (I) polled at 16 percent.

Past polls have shown the race to be virtually tied, with either Michaud or LePage with a slight lead. This is the first poll to show either candidate with a substantial lead.

This poll is also interesting as it shows that LePage would defeat both Cutler and Michaud in head-to-head races.

LePage leads Michaud 45 percent to 35 percent, with independent Eliot Cutler at 16 percent and 4 percent undecided, according to the poll of 639 likely voters conducted by the University of New Hampshire Survey Center. The landline and cellphone poll has a 3.8 percent margin of error and was conducted from Oct. 15 to 21, a period that coincided with three televised debates, leaving questions about whether the forums affected the results.

The findings include results that show respondents view Michaud as the more likable candidate, but they believe LePage better understands them.

Now, it's also important to note that this poll may be an outlier--after all, a NYT/YouGov poll showed Michaud with a two-point lead; within the margin of error.

LePage was named the winner of Maine's mock election last week. Maine's schoolchildren have correctly predicted the result of every gubernatorial election since its inception.