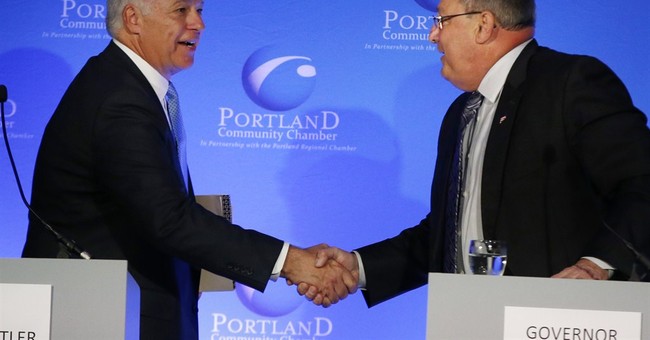 Gov. Paul LePage (R) will be re-elected with a three-point victory over Rep. Mike Michaud (D) and Eliot Cutler (I) this November...according to students at 130 Maine schools. About 12,000 students partook in the state's mock election, which is part of the national mock election program.

Thousands of students from across the state elected LePage over Democratic candidate Mike Michaud in this week’s mock election. LePage, who earned 38.5 percent of the nearly 12,000 votes, narrowly outpaced Michaud, who finished with 35.8 percent. Cutler placed third with 25.4 percent.

While the opinions of students--some of whom are nearly a decade away from being allowed to vote in an actual election--may be taken with a grain of salt, Maine's students have proven to be a decent barometer of the actual election results in recent years. In 2010, students predicted that LePage would beat Cutler by a very thin margin--and despite polls at the time showing LePage with a comfortable lead, the actual election was decided by a 9,000-vote margin.

The students have chosen the eventual winner in nearly every gubernatorial, congressional and Senate race since at least 2004. The lone exceptions are the 2008 1st Congressional District, in which students picked Charlie Summers over Chellie Pingree, and the 2004 presidential election, in which George W. Bush and John Kerry tied.

I've always found these types of mock elections to be intriguing, and I "voted" in the mock 2004 election. It's a safe bet to assume that most of these students are listening to their parents or the media to make a decision about whom to vote for in November. While these results could mean absolutely nothing, they might actually be on to something.

Polls continue to show a tight race between Michaud and LePage, with Cutler trailing.

The Reasoning Behind Gavin Newsom Hiding Key COVID Data Is Something Only a Liberal Would Thing Of...
Matt Vespa
Analysis: No, Tom Cotton Didn't Lie About His Military Service
Guy Benson
'No Plan' Update: 20 Million-Plus Vaccine Doses Now Administered in US, More Than 1 Million Daily
Guy Benson
GOP Senator Identifies Who Biden Is Helping By Canceling Keystone Pipeline