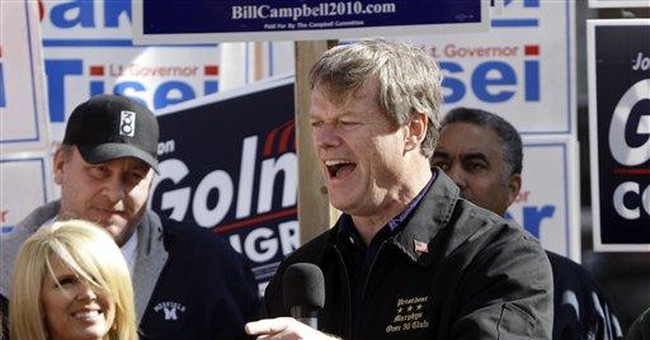 Things just got interesting in Massachusetts: A new poll of 605 likely voters has Republican candidate Charlie Baker taking a slim lead over Democrat Martha Coakley for the first time since polling began. Thirty-eight percent of respondents said they would vote for Baker, while 37 percent said they would support Coakley.

From the Boston Globe:

The survey found the hypothetical general election race in a statistical dead heat, with 38 percent of respondents saying they would support Baker for governor, a slight edge over the 37 percent who said they favor Coakley. Though Baker’s lead remains well within the margin of error, it shows movement in a race between the two likeliest candidates for the November election.

Baker is helped by the fact that a sizable percentage of supporters of Steve Grossman, a candidate challenging Coakley in the Democrat primary, say they would rather vote for Baker than Coakley if Grossman did not win the party's nomination. This may be the tipping point in what is likely to be a very close election come November.

If Grossman loses the primary, 48 percent of his supporters say they would bolt the party and vote for the Republican, rather than Coakley, in the general election. Just 28 percent of Grossman’s supporters would vote for Coakley, Della Volpe said. Conversely, if Coakley loses the primary to Grossman, the majority of her supporters — 56 percent — say they would support Grossman as the Democratic nominee, while 18 percent would turn to Baker, the poll showed.