Fr. John Hollowell, a priest and blogger from Indiana, saw a disturbing sign in the hallways of Northview High School in Brazil, IN. 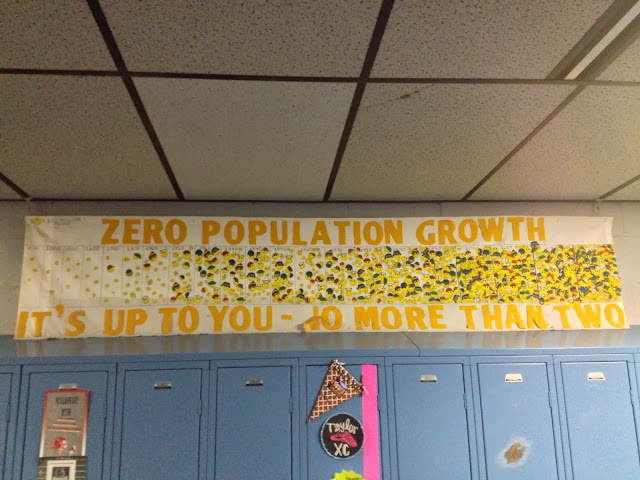 At first when I walked past the sign I thought to myself - "Oh, cool, they're starting to catch on that our population levels are at a critical phase and that we're heading for a demographic winter because no one is having kids anymore; they're trying to get the word out that our population growth is trending towards a crisis...."

Then I literally had a sick feeling in my stomach when I realized I had the sign completely wrong.

In 1968, the book The Population Bomb was released and predicted, among other things, mass famine and death from starvation due to overpopulation. The book initially claimed that there was no possible way for India to feed its population of 200 million. Since the book was published, India's population has grown to over a billion, and while malnourishment levels are unacceptably high, it is mostly due to corruption and and government ineffectiveness, not overpopulation. The mass starvation due to food shortages never came to fruition--food production actually increased faster than ever before.

Despite the completely wrong predictions in The Population Bomb, the idea that the world is becoming grossly overpopulated has remained in the public's mind. This has led to a shockingly low fertility rate in the western world--almost all of Europe is not reproducing at replacement-level rates.

It is not a school's job to dictate family size to its students, but I am not at all surprised by this sort of rhetoric. This ridiculous project is grounded in junk science and overly-hysterical predictions, and should not be presented as fact to students.