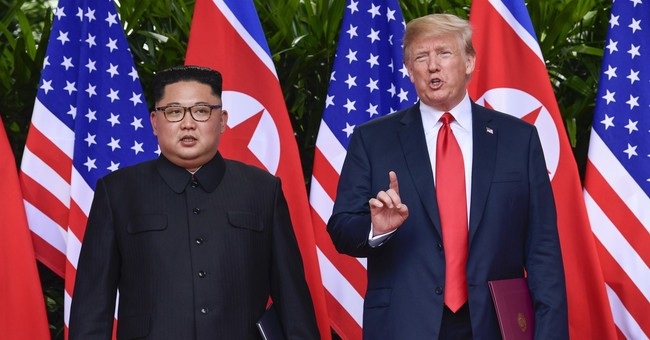 North Korea is eliminating anti-American propaganda from the country’s streets and domestic airwaves in the aftermath of this month’s Singapore summit between President Trump and Kim Jong Un. On Monday, this pattern of détente continued as North Korea cancelled an annual “anti-U.S. imperialism” rally set to mark the anniversary of the beginning of the Korean War. For years, this gathering had served as a way to rally popular support for the Kim regime by painting the United States as North Korea’s greatest enemy.

In concert with such propaganda, up until just a couple of months ago, posters and billboards depicting the United States as a warmongering, imperialist aggressor just on the verge of invading North Korea and slaughtering its people were ubiquitous in places like the capital city of Pyongyang. But now, according to sources on the ground inside the country, these propaganda images are disappearing from city streets for the first time in years:

“All the anti-American posters I usually see around Kim Il-sung Square and at shops, they’ve all just gone,” Rowan Beard, a tour manager at Young Pioneer Tours, told Reuters. “In five years working in North Korea, I’ve never seen them completely disappear before.”

Similarly hostile depictions of America in North Korea’s state news outlets have also reportedly disappeared from both its broadcast and print press, which constitute the only media allowed for domestic consumption by most of the population. Instead of showing disturbing fake images of ICBMs razing American cities to the ground or pink-clad news anchors cheering the totalitarian regime’s latest advances in nuclear weaponry, North Korean media have recently toned down their rhetoric to paint Trump in a more positive light:

"In tone, the US is now depicted as if it is a normal country," explains Peter Ward, North Korea expert and writer for NK News.

"All references to US actions that North Korea considers a hostile acts have disappeared from the paper."

There's even what Mr Ward describes as "neutral" coverage of the US quitting the UN human rights council.

"This is fascinating," he explains. "Generally speaking, neutral or positive coverage is normally reserved for countries that Pyongyang has friendly relations with."

Moreover, according to The Financial Times, the North Korean communist party’s official Central Committee newspaper Rodong Sinmun has refrained from any verbal criticisms or attacks on Trump since the time that the president first agreed to meet in person with Kim back in March.

North Korean government officials are also focusing on relatively trivial aspects of their anti-American propaganda machine and eliminating them from the country. In fact, according to a recent Reuters report, officially-sanctioned souvenirs and stamps sold in North Korean gift shops near the DMZ have all been changed to reflect North Korea’s more neutral stance towards the United States:

In the wake of Kim Jong Un’s summit with U.S. President Donald Trump, anti-American souvenirs once sold on the North Korean side of the Demilitarized Zone have disappeared from gift shop shelves, Western tour operators say.

Among more generic gifts like ginseng, a North Korean shop on the tourist route to the fortified border between the two Koreas usually sold stamps, postcards and other souvenirs attacking the United States.

“They’re always very popular, not very subtle, and, as of now, have all been removed,” said Simon Cockerell, general manager at Koryo Tours.

“We had a group go down to the DMZ from Pyongyang three days after the summit held in Singapore where we noticed the change in what was being sold to tourists at the gift shop,” said Rowan Beard, a tour manager at Young Pioneer Tours.

“They’ve shifted the focus from anti-Americanism to improving agriculture, sports and boosting the local economy.”

Of course, North Korea’s positive propaganda shift will only be likely to hold for as long as negotiations between the Trump administration and Kim’s government remain productive for both sides. But for the moment at least, these improvements in U.S.-North Korea relations do mark an important milestone in our countries’ relationship. If the United States can ultimately secure a peace deal to end the nearly seventy-year conflict on the Korean peninsula, it will be a massive success for the Trump administration that practically nobody saw coming.