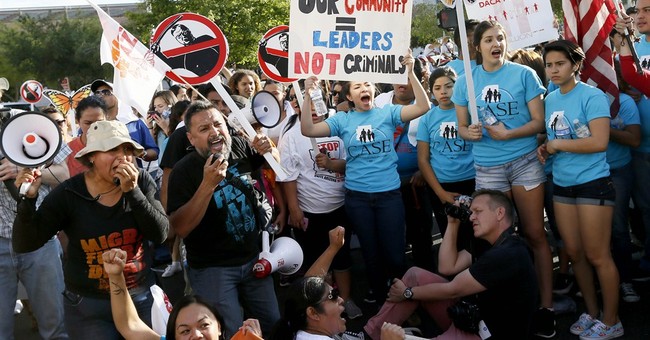 On Easter Sunday, President Trump heard about the thousands of illegal aliens who are marching through Mexico towards the U.S. border and, quite understandably, expressed his frustration with the development on Twitter by calling for congressional Republicans to act.

However, in spite of Trump’s suggestion, there are already laws that empower his Justice Department to act against the primary group organizing the caravan, Pueblo Sin Fronteras (PSF; “People Without Borders”).

Under Section 274 of the Immigration and Nationality Act, any person who knowingly brings or just attempts to bring an alien into the United States illegally has committed a crime punishable by up to ten years in prison. Moreover, anyone who “encourages or induces an alien to come to, enter, or reside in the United States” illegally can be jailed for up to five years. Someone who “aids or abets” people in committing either of the above acts can also be jailed for five years.

According to BuzzFeed News reporter Adolfo Flores, who is following and documenting the caravan’s march north, PSF’s explicit intent in organizing the march is to help many Central American migrants enter the United States illegally [emphasis mine]:

From the above descriptions, it seems pretty undeniable that the PSF organizers are knowingly seeking to help thousands of illegal aliens thwart American immigration laws.

So who exactly are the “People Without Borders,” and what is it that drives their agenda?

Most information about PSF comes from its official social media pages and website, which declare that the group’s “dream is to build solidarity bridges among peoples and turndown [sic] border walls imposed by greed” by providing “humanitarian aid to migrants and refugees on the move.”

But the group is, as its name would suggest, not merely some humanitarian, pro-refugee organization — its members are completely opposed to the enforcement of state borders (at least by the United States).

As evidence of this, PSF is currently working together with several other pro-illegal immigration groups to organize an event for April 10th called the “People’s Summons to the #ICEonTrial Tribunal.” According to the event’s Facebook page, it will actually consist of several fake “tribunals” set up outside ICE and other law enforcement offices in Washington D.C., San Francisco, and Oakland. Activists plan to use the events to protest against government officials who are, in the words of the organizers, “complicit in the mass incarceration and deportation machine” [emphasis mine]:

As ICE continues to target and terrorize immigration rights' activists and other community members by serving them with Notices to Appear (which signal the start of deportation proceedings), these People's Summons will serve both as a public call for accountability and a learning moment for authority figures who have never had to experience the anxiety of receiving a slip of paper designed to instill fears over being forcibly separated from their loved ones and exiled from their homes.

At the People's Tribunal, survivors of ICE detention will share their testimonies about the physical and psychological consequences of being caged for a civil violation. Our People's Summons demand that the individuals in power who profit off the suffering of our neighbors and comrades listen to these stories of harm and abuse that they choose to so heartlessly and cowardly inflict, and accept the judgment that we, the people, issue in turn.

One wonders what “we, the people” these “comrades” are referring to? Certainly, it can’t be the American people, who already have their own legitimate, if imperfect, instruments of justice?

If Trump wants to ensure that those instruments don’t go to waste in this case, then he should immediately direct Jeff Sessions and the Justice Department to investigate the leaders of groups like PSF or any other organizations that unabashedly and openly advocate committing federal crimes. Without such action, passing more laws that U.S. authorities are not necessarily willing to enforce will do little to fix the problem of illegal immigration.

In the meantime, Governor Greg Abbot has responded to concerns about the illegal alien caravan marching across Mexico by reassuring the public that he has the Texas National Guard and the state’s Department of Public Safety at his section of the border, ready to respond.

Texas already has the National Guard and Dept. of Public Safety deployed to the border. https://t.co/HFNfC9ckRH