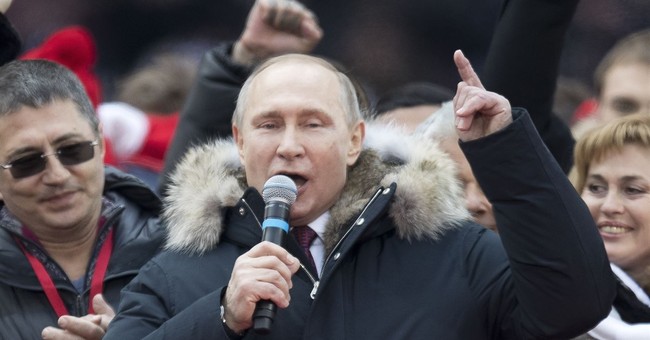 UPDATE: Prime Minister Theresa May followed through on her ultimatum to Moscow this morning when she announced the expulsion of 23 Russian diplomats from Britain following the attempted assassination Sergei and Yulia Skripal with a Soviet-developed nerve agent.

The Russian government failed to respond by midnight on Tuesday to the prime minister’s demands for a plausible explanation for the attack and why it was committed with a nerve agent that the Russians are known to have in their possession.

May took to the floor of the British Parliament to explain her government’s response to Russia [emphasis mine]:

“It was right to offer Russia the opportunity to provide an explanation, but their response has demonstrated complete disdain for the gravity of these events. They have provided no credible explanation that could suggest they lost control of their nerve agent. No explanation as to how this agent came to be used in the United Kingdom. No explanation as to why Russia has an undeclared chemical weapons program in contravention of international law. Instead, they have treated the use of a military-grade nerve agent in Europe with sarcasm, contempt, and defiance.

“So, Mr. Speaker, there is no alternative conclusion other than that the Russian state was culpable for the attempted murder of Mr. Skripal and his daughter and for threatening the lives of other British citizens in Salisbury, including Detective Sergeant Nick Bailey. This represents an unlawful use of force by the Russian state against the United Kingdom.”

“Under the Vienna convention, the United Kingdom will now expel 23 Russian diplomats who have been identified as undeclared intelligence officers. They have just one week to leave. This will be the single biggest expulsion for over 30 years… Through these expulsions, we will fundamentally degrade Russian intelligence capability in the UK for years to come.”

May went on to propose the passage of a new law to empower UK border agents to more easily detain people suspected of working on behalf of foreign countries. She also discussed strengthening economic sanctions against Russia and improving counterintelligence and surveillance capabilities to vet people wishing to travel to or live in the UK.

On 14 of March Russian Ambassador Alexander Yakovenko was summoned to the Foreign and Commonwealth Office where he was informed that 23 diplomats were declared personae non gratae.

We consider this hostile action as totally unacceptable, unjustified and shortsighted.

All the responsibility for the deterioration of the Russia-UK relationship lies with the current political leadership of Britain.

On March 4th, Russian defector and former British intelligence source Sergei Skripal and his daughter Yulia were found slumped over on a bench in the city center of Salisbury, clearly in distress. As first responders quickly discovered, the Skripals had been poisoned with a potentially deadly nerve agent.

But the damage was not limited just to them. Detective Sergeant Nick Bailey, one of the first officers to respond to the scene, also fell ill and was hospitalized after being exposed to the nerve agent. Furthermore, hundreds of local residents in the small Southern English town who came into contact with the Skripals or the restaurant and pub that they had been in that day had to decontaminate their belongings to prevent potential poisonings.

After two weeks of investigation, with the Skripals still in critical condition, the British government now firmly believes that the Kremlin is responsible for the attack. This is due in large part to the findings of investigators who have concluded that the Skripals were poisoned with a Soviet-developed nerve agent known as “Novichok.”

On Monday, Prime Minister Theresa May spoke to the British Parliament to publicly demand an explanation from the Russian government for the poisoning [emphasis mine]:

“It is now clear that Mr. Skripal and his daughter were poisoned with a military grade nerve agent of a type developed by Russia. This is part of a group of nerve agents known as “Novichok.” Based on the positive identification of this chemical agent by world leading experts at the Defense Science and Technology Laboratory at Porton Down, our knowledge that Russia has previously produced this agent and would still be capable of doing so, Russia’s record of conducting state-sponsored assassinations, and our assessment that Russia views some defectors as legitimate targets for assassinations, the government has concluded that it is highly likely that Russia was responsible for the act against Sergei and Yulia Skripal.

“Mr. Speaker, there are therefore only two plausible explanations for what happened in Salisbury on the 4th of March. Either this was a direct act by the Russian state against our country, or the Russian government lost control of its potentially catastrophically damaging nerve agent and allowed it to get into the hands of others.

“This afternoon, my right honorable friend the foreign secretary has summoned the Russian ambassador to the Foreign and Commonwealth Office and asked him to explain which of these two possibilities it is, and therefore to account for how this Russian-produced nerve agent could have been deployed in Salisbury against Mr. Skripal and his daughter.

"My right honorable friend has stated to the ambassador that the Russian Federation must immediately provide full and complete disclosure of the Novichok program to the Organization for the Prohibition of Chemical Weapons, and he has requested the Russian government’s response by the end of tomorrow.”

May went on to link the attempted assassination of the Skripals with Russia’s aggressive foreign policy under President Putin, including its 2014 annexation of Crimea and subsequent support for rebels in Eastern Ukraine and the 2006 assassination of former FSB agent Alexander Litvinenko in London. Vowing that harsh measures would be imposed on Russia for failing to cooperate with British authorities investigating the poisoning, May closed her remarks by re-iterating the point that her government sees the poisoning as an attack not just against the Skripals, but the United Kingdom as a whole [emphasis mine]:

“On Wednesday, we will consider in detail the response from the Russian state. Should there be no credible response, we will conclude that this action amounts to an unlawful use of force by the Russian state against the United Kingdom. And I will come back to this House and set out the full range of measures that we will take in response. Mr. Speaker, this attempted murder using a weapons-grade nerve agent in a British town was not just a crime against the Skripals. It was an indiscriminate and reckless act against the United Kingdom, putting the lives of innocent civilians at risk, and we will not tolerate such a brazen attempt to murder innocent civilians on our soil.”

On Tuesday, British foreign secretary Boris Johnson confirmed May’s ultimatum and stressed his appreciation for those that have spoken out against Russia in light of the attempted assassination, including now-outgoing U.S. Secretary of State Rex Tillerson:

“What we’re doing today is giving Russia until midnight tonight to explain how it came to be that Novichok was used on the streets of Wiltshire. If they can come up with a convincing explanation, and obviously we will want to see full disclosure of that to the Organization for the Prohibition of Chemical Weapons in The Hague. If not, then clearly we will want to be announcing the UK response, and that will come tomorrow.

“In the meantime, what we’ve been doing is talking to friends and partners, explaining what we see as the high likelihood of Russian state agency. And I’ve been very encouraged so far by the strength of the support that we are getting, I think in particular from President Macron of France, from -- I just talked to Sigmar Gabriel, my German counterpart, and from Washington, where Rex Tillerson last night made it absolutely clear that he sees this as part of a pattern of disruptive behavior, and increasingly disruptive behavior, malign behavior by Russia.

The UK government’s demands for cooperation in their poisoning probe are unlikely to be complied with. The Russian Foreign Ministry denied that Moscow had any involvement in the poisoning and has also demanded that the British government hand over samples of the nerve agent used in the attack to Russia for its own examination.

Russian Foreign Minister Sergei Lavrov has insisted that the accusations from the British government must be evaluated by proper international authorities under the terms of the 1993 Chemical Weapons Convention, which prohibits “the development, production, acquisition, stockpiling, retention, transfer or use of chemical weapons” by signing countries, including Russia.