Thus sits the legacy of the radical climate change movement – yet they remain adored and worshiped by the Left and the nations of the world that wish the U.S. ill.

Why? Trillions of dollars are at stake for the global warming movement if they can continue to fool the world that climate change is a man-made disaster that can be curbed by taxing the wealth-creating countries – namely the United States – and working to destroy the economies of successful nations to make everyone the same.

But it’s all a sham. And the January issue of Townhall Magazine details Hoax & Change.

Speaking of Hoax & Change, President Obama’s foreign policy agenda and efforts of proven be to a series of failures as he jets around the world bowing to foreign leaders and apologizing for America. The newest issue of Townhall lays out the many shortcomings this administration has had – all around the world.

The administration’s failures are not limited to foreign policy, as many conservatives are well aware. They’re also not doing too well on Homeland Security, either. Just think back a few days to the would-be Christmas Day airplane bomber who had explosives hidden in his Skivvies. (No, Secretary Napolitano, the system did not work.) So, what does the DHS need to do to keep us safe? Townhall Magazine lays out a Homeland Security agenda.

With all the disasters surrounding the Obama White House, Republicans believe their 2010 and 2012 prospects are pretty good. So who’s going to lead them? In an ongoing series of profiles of big-name conservatives and possible leaders of the GOP, Townhall gets up close and personal with Minnesota Gov. Tim Pawlenty. Is he the next leader for the Party?

And from the “what-won’t-they-do-next-to-control-your-life” file, we document the war on plastic bags and the efforts of the Left to reduce your freedoms and take your money.

Plus, just in time for the New Year, S.E. Cupp offers a New Year Resolution for 2010 from Ted Nugent, and Ann Coulter lets fly her thoughts on the Obama plan to move the Gitmo prisoners to the U.S. 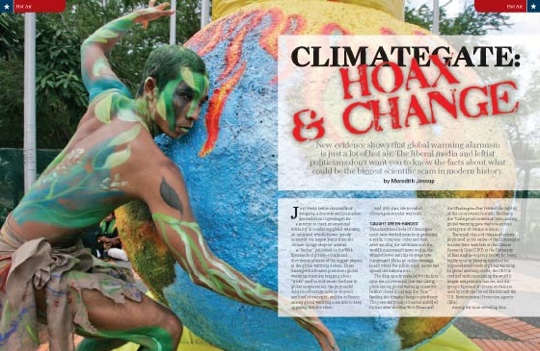 In her cover story for the January issue, “Climategate: Hoax & Change,” Townhall contributing editor Meredith Jessup reports on the evidence showing that global warming alarmism is just a lot of hot air and the cover-up by the left-wing press. The liberal media and leftist politicians don’t want you to know the facts about what could be the biggest scientific scam in modern history.

Just weeks before thousands of delegates, advocates and journalists descended on Copenhagen for a summit to mark international solidarity in combating global warming, an unnamed whistleblower quietly unloaded the largest bomb from the climate change skeptics’ arsenal.

In one full swoop, the Climategate whistleblower had uncovered the hidden truths behind global warming alarmism: deleted e-mails, hidden declines, inaccurate data, destroyed research and the redefinition of peer-reviews for their own uses. Phil Jones has “temporarily stepped down” from his position at the CRU, and the United Nations has announced it will be investigating the validity of its own climate data. The story of Climategate exposes what goes on behind the scenes while trillions of dollars are on the line for policy decisions based on the findings of these scientists.

This all sounds like a Woodward-and-Bernstein-sized news story, but the reaction of the mainstream media suggested the whole thing came nowhere near priority news status. Most of the world’s media simply ignored the news about the decades-old organized corruption and scientific crime reaching from the University of East Anglia all the way to the United Nations.

After acknowledging the validity of the explosive e-mails, the New York Times balked and said they would not be publishing any of the documents because they “appear to be acquired illegally and contain all manner of private information and statements that were never intended for the public eye.” Skeptics scoffed at this empty oath coming from the same paper that had previously published the highly classified top-secret Pentagon Papers less than 40 years ago and has since widely published information related to the intelligence community’s monitoring of terrorists and specific strategies for how the U.S. protects its troops in the field.

The story was largely ignored for weeks on television and resonated only with Internet surfers getting news from U.K. sources and bloggers who buzzed as they worked through the pages of data and e-mails. The budding scandal was completely invisible to those not tuning into Fox News—NBC, ABC, CBS, MSNBC and CNN had reported nothing on the story weeks after the whistle had been blown. 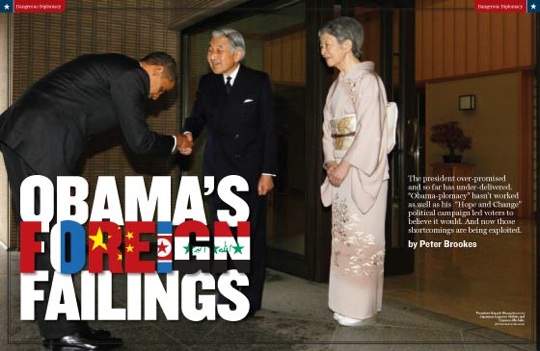 The president over-promised and so far has under-delivered. “Obama-plomacy” hasn’t worked as well as his “Hope and Change” political campaign led voters to believe it would. And now those shortcomings are being exploited. So reports Peter Brookes in “Obama’s Foreign Failings.”

Fewer, however, have probably realized the Obama administration’s foreign and national security policies are flagging after a year in the White House, too, putting this country at increasing risk in an already dangerous world.

Unfortunately, the White House’s brand of “biography-based” foreign policy just isn’t cutting it so far on the big national security issues of the day such as China, North Korea, Iran, Afghanistan, Russia and Venezuela.

In fact, it’s quite the opposite: Weak-kneed, apologetic “Obama-plomacy” is already being exploited across the globe. Our image, standing and reputation are suffering with partners who worry about our going wobbly despite Obama’s rhetorical flourishes. 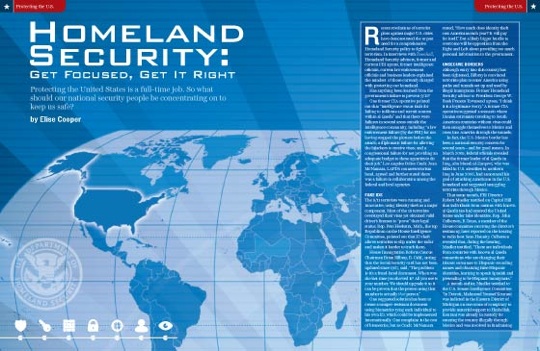 Protecting the United States is a full-time job. So what should our national security people be concentrating on to keep us safe? With several interviews with Intelligence and Security sources, Elise Cooper offers an important list of priorities and ideas in “Homeland Security: Get Focused, Get It Right.” 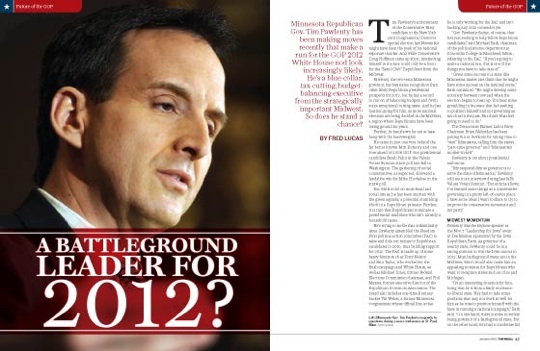 In “A Battleground Leader for 2012?” Fred Lucas reports that Minnesota Republican Gov. Tim Pawlenty has been making moves recently that make a run for the GOP 2012 White House nod look increasingly likely. He’s a blue-collar, tax-cutting, budget-balancing executive from the strategically important Midwest. So does he stand a chance? 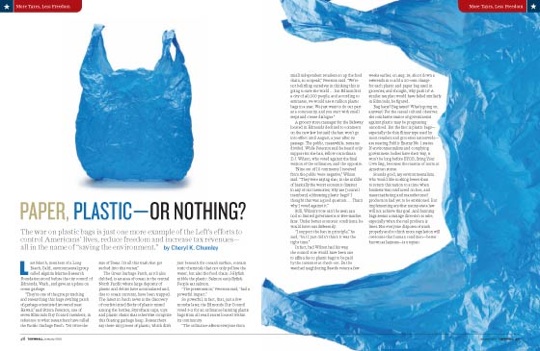 The war on plastic bags is just one more example of the Left’s efforts to control Americans’ lives, reduce freedom and increase tax revenues – all in the name of “saving the environment.” "Paper, Plastic – or Nothing?" examines the movements around the country to make your life even more expensive.

More from the January issue:

*Radical leftist Rep. Henry Waxman says that the government is going to have to help shape the media.

*Mary Katharine Ham: Democrats demagogue on race and dodge their own records.

*Calling all “Churchills”: Look at the world, this is no time for weakness.

*Get to know an organization that’s honoring our vets by flying them to their war memorials without costing any of our heroes a dime.

*We’re going to run out of oil? Nonsense.

*Enemy of the state: political correctness.