Take a Look at the February Issue of Townhall 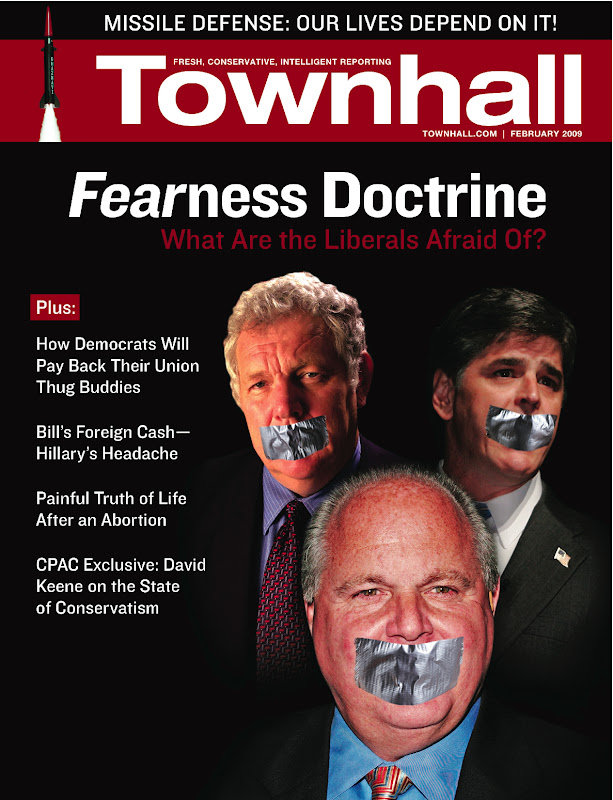 The February 2009 issue of Townhall magazine has been hitting subscribers’ mailboxes over the last week, and it’s already making waves.Conservatives have long known that the Left is determined to destroy the Right -- rather than peacefully coexist. The oh-so-tolerant American Left is determined to make conservative speech and thought a thing of the past.
Our cover this month offers a provocative look at the “Fairness Doctrine” and how the Left – with the help of the Obama administration – can reinstate the free-speech restrictions on talk radio without passing a single bill.If you think the liberal media are bad now, wait until there a limits put on conservative talkers who counter there misinformation, lies by omission and outright spin on behalf of the Democratic Party. 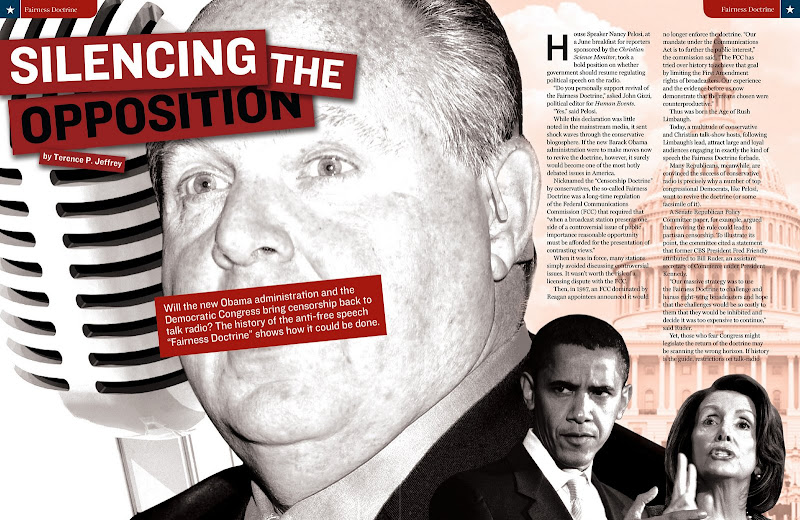 My friend Terence Jeffrey, editor in chief of CNSNews.com, takes an in-depth look at the history of the Fairness Doctrine and what we need to be watching for. From “Silencing the Opposition”:

House Speaker Nancy Pelosi, at a June breakfast for reporters sponsored by the Christian Science Monitor, took a bold position on whether government should resume regulating political speech on the radio.“Do you personally support revival of the Fairness Doctrine,” asked John Gizzi, political editor for Human Events.“Yes,” said Pelosi.While this declaration was little noted in the mainstream media, it sent shock waves through the conservative blogosphere. If the new Barack Obama administration were to make moves now to revive the doctrine, however, it surely would become one of the most hotly debated issues in America.Nicknamed the “Censorship Doctrine” by conservatives, the so-called Fairness Doctrine was a long-time regulation of the Federal Communications Commission (FCC) that required that “when a broadcast station presents one side of a controversial issue of public importance reasonable opportunity must be afforded for the presentation of contrasting views.”When it was in force, many stations simply avoided discussing controversial issues. It wasn’t worth the risk of a licensing dispute with the FCC.Then, in 1987, an FCC dominated by Reagan appointees announced it would no longer enforce the doctrine. …… Yet, those who fear Congress might legislate the return of the doctrine may be scanning the wrong horizon. If history is the guide, restrictions on talk-radio speech are more likely to come directly from the unelected FCC.That is where the Fairness Doctrine came from in the first place. …

Get the February issue of Townhall to read the rest.
*** 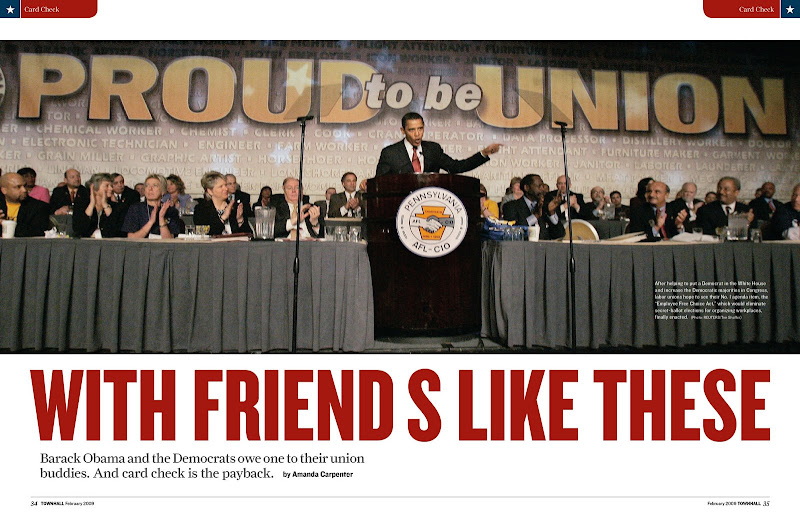 We also have a great piece by our Amanda Carpenter on card check. In “With Friends Like These,” Amanda reveals the truth about the Free Choice Act and how the Democrats and their Big Labor thug buddies want to eliminate the secret ballot.
*** 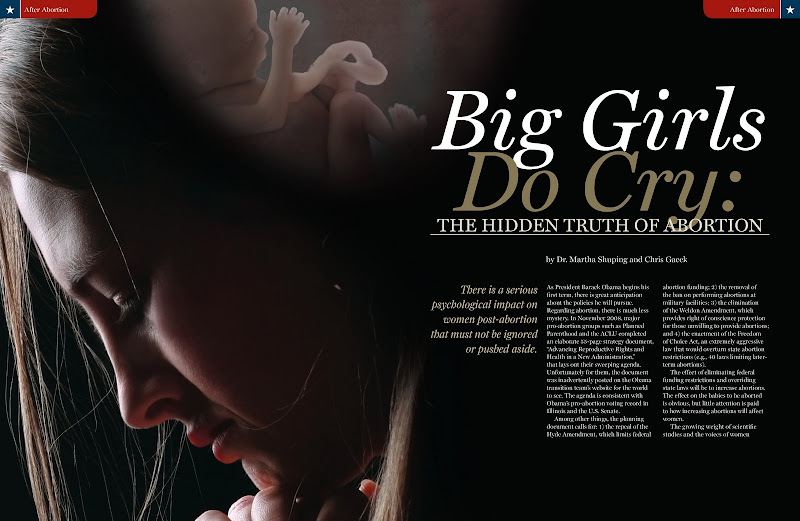 In “Big Girls Do Cry: The Hidden Truth of Abortion,” the Dr. Martha Shuping and Chris Gacek, with the Family Research Council, reveal the serious psychological impact on women post-abortion that must not be ignored or push aside.
*** 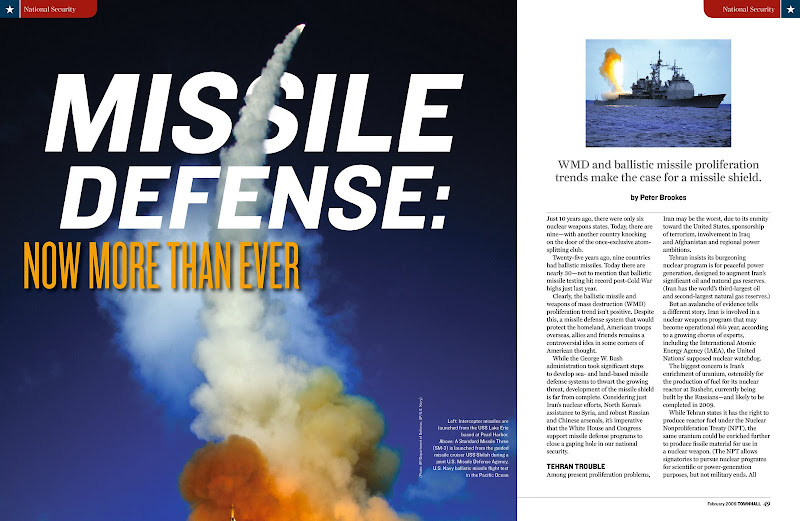 Regular Townhall contributor Peter Brookes, in “Missile Defense: Now More Than Ever,” explains why we need to build the shield – and do it now. Our enemies are not going to wait.And some of the other stuff …* ACU Chairman David Keene takes a look at the state of conservatism and details the key to a comeback for the Right and the GOP. * A Q&A with conservative favorite Rep. Michele Bachmann, R-Minn.* How Bill’s foreign cash is and will be a headache for Hillary and the Obama administration.* Mary Katharine Ham wonders why the media are so surprised Obama doesn’t answer their questions. If they had been doing their jobs during the campaign, they would have seen it coming. * Plus, get a glimpse of the Obama-mania that took over Washington, D.C., at inauguration time.And there’s much more. Order Townhall magazine today.
AG Garland Debunks Democrat 'Insurrection' Claims About January 6th
Spencer Brown
Another One: New Poll Shows Biden Approval Sinking into 30's
Guy Benson
Why Did You Do That, Netflix CEO? The Woke Mob Was Mostly Defeated Over Dave Chappelle Controversy
Matt Vespa