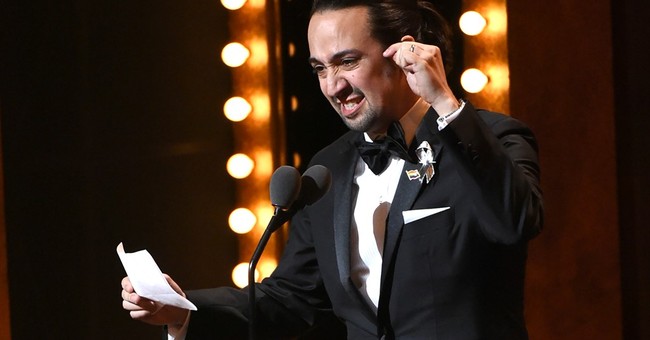 While receiving the award for best original score, Miranda pulled out a 16-line poem that paid tribute to the 49 individuals killed at an Orlando nightclub early Sunday morning. Widely praised, the poem brought many in the audience to tears.

“I hadn’t heard about the day’s events until after our Tony rehearsal,” Miranda told reporters after the show. “I had this time between rehearsal and tonight to sit and think about what I would say if I would be lucky enough to be called up. And it sort of informed all of it, obviously. We live in this world where beautiful and horrible things exist at the same time."

My wife’s the reason anything gets done

She nudges me towards promise by degrees

She is a perfect symphony of one

Our son is her most beautiful reprise.


We chase the melodies that seem to find us

Until they’re finished songs and start to play

When senseless acts of tragedy remind us

That nothing here is promised, not one day.


This show is proof that history remembers

We lived through times when hate and fear seemed stronger;

We rise and fall and light from dying embers,

Is love is love cannot be killed or swept aside.

Now fill the world with music, love and pride.