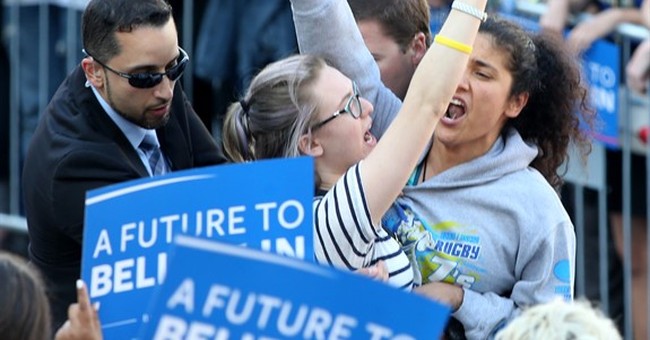 Animal rights activists rushed the stage as presidential candidate Bernie Sanders was delivering a speech in Oakland this Monday. Secret Service agents reacted quickly, shielding Sanders from the protesters before escorting them from the event.

In a press release, the group Direct Action Everywhere (DxE) explained that the activists were protesting to encourage Sanders to adopt a stronger position on animal rights:

Activists do not protest at Bernie Sanders rallies in opposition to Sanders himself, but rather to pull Sanders in their direction. Sanders’ opponent Hillary Clinton recently released a campaign platform on animal issues, although it stops far short of what activists would like to see. Activists expect Bernie Sanders, the progressive candidate, to support more radical action to provide animals not just with improved conditions but with legal rights to be free from harm.

DxE promotes the idea that animals are entitled to certain basic rights, including “freedom from exploitation and enslavement.” Its ultimate goal is animal liberation, or for animals to be free from use by humans. It is in this respect that the animal rights agenda differs from the more mainstream movement for animal welfare.

As DxE alluded to in its press release, Hillary Clinton has adopted several positions promoting animal welfare: ending puppy mills, combatting wildlife trafficking, and encouraging more humane farming practices. Members of DxE want Bernie Sanders to go further than simple animal welfare and endorse their agenda of recognizing animals’ rights, which would require massive policy reconfigurations to prevent the violation of those rights. For DxE activists, to do otherwise would contradict the principles on which Sanders has campaigned.

“His campaign has promoted itself based on this idea of progressivism and rejecting discrimination and inequality," said Zach Groff of DxE, speaking to ABC News, "but when it comes to the animals in the United States and around the world, discrimination and violence is the name of the game every single day.”

Sanders continued with his rally immediately after the protesters were removed. “We don’t get intimidated easily,” he said, garnering loud applause.