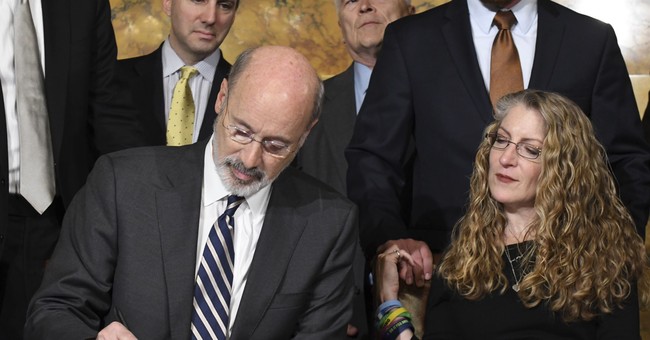 In an unexpected twist last week, Pennsylvania Gov. Tom Wolf (D) implied that he could work with his state’s Republicans to pass stricter voter identification legislation.

“I’m sure, out there, is a reasonable voter ID solution to say…you need to show that you should be voting here,” Wolf said in an interview with The Philadelphia Inquirer last Tuesday. “And I’m fine with that. The formula in [the Republican bill], in my mind, was not it.”

The bill Wolf referenced, formally known as House Bill 1300, was passed by the Republican-controlled Pennsylvania House of Representatives on June 23. Among other measures to ensure the integrity of state elections, it would have required voters to present a form of ID every time they go to the polls.

However, Wolf vetoed HB 1300 a week later, claiming in his veto statement that its enactment would “threaten to disrupt election administration, undermine faith in government, and invite costly, time-consuming, and destabilizing litigation.”

Just weeks after the veto, Wolf’s remarks were met with surprise from the Pennsylvania GOP, including HB 1300’s main sponsor, Rep. Seth Grove (R-York). Grove criticized Wolf for not reaching a compromise and blamed his administration for the breakdown of election reform.

“I’m dumbfounded,” Grove told the Inquirer. “I’m literally dumbfounded … This entire issue is on his administration being unwilling to come to the table and have discussions on elections.”
Despite actions that clearly show Wolf is against voter ID expansion, the governor clarified his position last Thursday by accusing its proponents of voter suppression.

“I'm willing to have a conversation about voting reform,” Wolf said. “But if you’re trying to suppress the vote, that’s just a nonstarter for me.”

Wolf joins President Biden, Stacey Abrams, and other prominent Democrats in his opposition to universal voter ID laws. The party has long argued that such laws are racist tools of voter suppression, but the truth is that voter ID remains popular among the American public.

Any serious discussions about elections in Pennsylvania should certainly mention the 2020 presidential election. Joe Biden defeated Donald Trump by a margin of just 80,000 votes in the Keystone State (1.17 percent of the total votes cast), and the post-election counting of thousands of mail-in ballots was enabled by a controversial state Supreme Court decision last September.

The United States Supreme Court upheld this election results last October, paving the way for Biden’s victory in November. Spearheaded by state Sen. Doug Mastriano (R-Franklin), Trump allies in Pennsylvania are pushing for a full election audit in the state.

Pennsylvania’s election laws currently require voters to present an ID upon their first time voting at a new polling location. A previous GOP effort to expand the voter ID requirements was blocked by the Pennsylvania Supreme Court’s Applewhite decision in 2014.