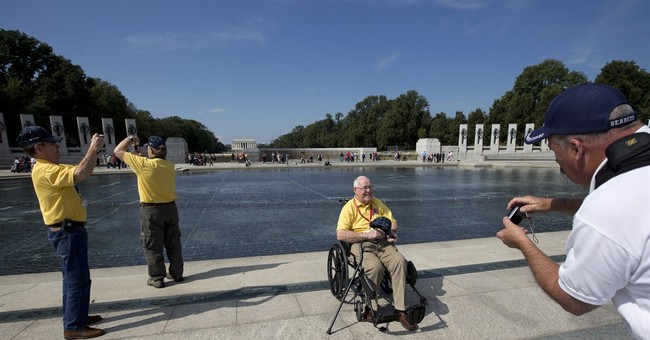 During the sequester, recall the ways the Obama administration explicitly tried to inflict maximum pain on the American people in order to "prove" that the relatively modest cuts to government spending were cataclysmic.

Today, the administration tried the same kind of scurrilous tricks -- but to their shame, they actually sought to punish elderly and disabled World War II veterans for the Democrats' intransigence and refusal to negotiate. As Guy mentioned below, World War II veterans who had come to Washington to visit the memorial to the war they fought ignored the barricades that had been erected by the administration for the duration of the shut-down.

But according to an exclusive at The Daily Caller, the Obama administration actually knew in advance that these veterans were going to be visiting the World War II memorial and refused to make any accommodation for them, despite a request from a congressman.

Keep in mind that these are old men, some of whom are in poor health. They were flown to DC by a non-profit, Honor Flight, to visit the memorial. Note also that, being an open-air memorial -- and as such generally accessible to the public 24/7 -- it requires more work (and hence greater expenditure of government money) to block it off than to leave it alone.

The entire episode is entirely emblematic of the Obama administration's faux frugality, political posturing, and contempt for Americans on so many levels.