Rep. Mike Pompeo (R-KS) is the type of elected official who should come to the forefront of the Republican Party.  Not only is he a conservative, he is a conservative who is able to explain his positions with ease and clarity.  In response to Jay Carney's gibe about what he would say to workers furloughed because of the sequester, Rep. Pompeo offered this statement on his facebook page:

Mr. Carney doesn’t understand that not every public official is willing to play games with lives of hard-working Americans for political gain like his boss, President Obama. I said that the sequester is a home run not because it is good politics, but because it begins to put America back on the right fiscal track.

“I would welcome the opportunity to tell the 90,000 furloughed workers, the ones President Obama is choosing to let go of, that they need to know several things:

“First, the sequester does not have to mean furloughs. The President is choosing to make this minor reduction in spending painful—by furloughing people—in order to pursue his twin goals of raising taxes and increasing the size of the federal government. The President wasted $1 trillion dollars of stimulus money that did nothing to grow our economy and create jobs. Now, he is needlessly using a decrease in federal spending amounting to less than a few percent to harm even more American workers and their families.

“Second, there are fewer Americans working in America today than when the President took office. I find it bizarre that Mr. Carney would ask me about talking to furloughed workers. I’ve been talking to and representing thousands of furloughed and laid-off workers in Kansas who have lost their livelihood because of this President’s failed economic policies and his consistent attacks on the general aviation industry. Before President Obama’s reckless deficits, general aviation was a robust manufacturing jewel providing high-paying jobs in the Air Capital of the World. Today, he continues to cause it pain.

“Third, Mr. Carney says that this isn’t a home run for average Americans. He is wrong. While there will surely be dislocations, the President’s $6 trillion in new federal debt have been a strikeout for our country. Most Americans understand the need to stop year-on-year trillion dollar deficits. For them, we should have done even more to reduce the size of our federal government. The sequester is a solid first step. Growing American prosperity will require us to hit a grand slam on reducing spending, taxation, and regulation. I look forward to being part of making that happen.

“Finally, the President proposed, signed, and threatened to veto changes to, the sequester. It was his plan. Not once, but twice, Congressional Republicans have provided alternatives. We have seen nothing from Carney’s boss. If it is really that bad, why has he not sent a different set of cuts? The President’s actions—claiming to be upset about the sequester and traveling to Virginia to confuse workers there—are at best disingenuous and at worst just plain mean.”

Nicely done.  And to offer a visual counterpart to Rep. Pompeo's statement, here is a chart that highlights, in graphic form, the size of the cuts the President is claiming will bring America to its knees: 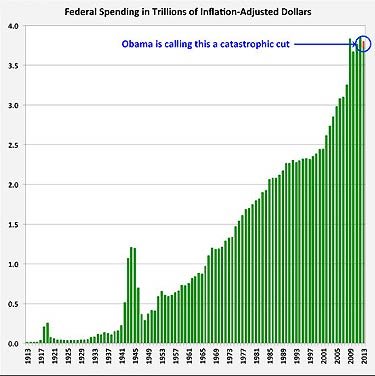 I suspect few individuals or institutions in this country during the Obama presidency have had the luxury of having to "endure" cuts of such miniscule size.