Guess Who Opposes Mail-In Voting in an Upcoming Election? 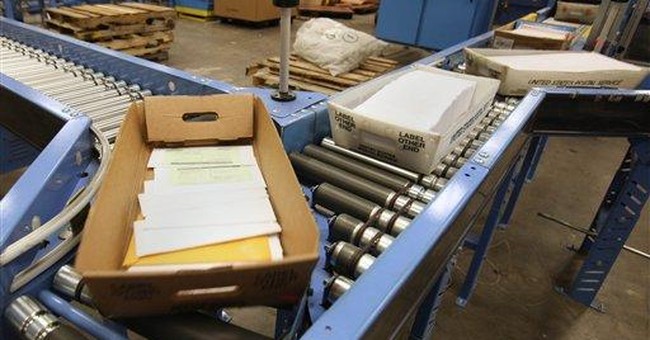 Despite the media's constant assurances that it's nearly impossible to commit voter fraud by mail, it seems billionaire Jeff Bezos and officials at Amazon disagree with that assertion.

The online retailer is urging the National Labor Relations Board to reconsider a decision allowing 6,000 Amazon employees at the company's warehouse in Bessemer, Alabama, to vote by mail in an upcoming unionization vote. Amazon is seeking to postpone the election while the Labor Relations Board reviews the decision.

According to a representative of the company who spoke to CNN, Amazon believes in-person voting is "the best approach to a valid, fair and successful election" because in-person voting allows "associates to verify and cast their vote in close proximity to their workplace." What a concept.

"Amazon provided the NLRB with a safe, confidential and convenient proposal for associates to vote onsite which is in the best interest of all parties -- associate convenience, vote fidelity, and timeliness of vote count," Amazon spokeswoman Heather Knox said in the statement to CNN. "We will continue to insist on measures for a fair election, and we want everyone to vote, so our focus is ensuring that's possible."

Democrats pushed hard for mail-in-voting and other measures ahead of the November elections. The use of mail-in voting appears to have undermined confidence in the integrity of the results, as nearly 40 percent of likely voters believe that mail-in voting led to unprecedented fraud in the last election cycle, according to a poll.

Amazon came under fire earlier this week after sending a congratulatory letter to President Joe Biden and Vice President Kamala Harris. In the letter, the company volunteered its considerable resources to help the Biden administration with vaccine distribution efforts. Critics accused the company of playing politics, noting the company's failure to make such an offer during the Trump presidency.